Obama's ahead, polls say, but will the lead last?

(CNN) -- With a week to go before Election Day, most recent national polls show Democratic presidential nominee Barack Obama with an advantage. But how much are they to be believed? 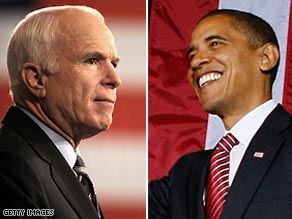 As Election Day gets closer, will the race tighten in the polls?

The most recent national CNN poll of polls showed Obama with an 8-point lead over Republican presidential nominee John McCain, 51 percent to 43 percent. The polls were conducted October 21 through October 26.

Most other national polls show Obama with a lead ranging between 5 points and double digits.

A look at CNN polling during the same period before Election Day in 2000 and 2004 suggests that political observers and campaign supporters ought to be cautious in declaring the race over because of current polling numbers. See the latest state and national polls

When a presidential race has a non-incumbent in the lead, like this year, the poll numbers tend to tighten as Election Day gets closer, CNN senior researcher Alan Silverleib said.

"Any time it looks like they are on the verge of voting somebody new into office, there is buyer's remorse," he said. "Based on that, and the fact that the country has been so polarized in recent elections, there's pretty good reason to think that the polls might tighten up a little bit."

The poll was released October 25 and reflected likely voters' choice for president. Election Day was November 2 in 2004.

In 2000, it was a bit of a different story. Election Day arrived November 7 that year.

A CNN/USA Today/Gallup tracking poll conducted October 29 through October 31 showed Bush, then the Texas governor, leading Democratic Sen. Al Gore, 48 percent to 43 percent. The poll had a margin of error of plus or minus 2 percentage points.

A subsequent poll conducted November 2 through November 4, released two days before the voters cast their ballots, showed the same results.

Gore, however, ended up winning the popular vote by about 540,000 votes. When broken down by percentage, both candidates had about 48 percent of the popular vote. Bush won the Electoral College, and thereby the presidency, by 5 electoral votes.

Two of the battleground states this year, as in many recent presidential elections, are Ohio and Florida. What did the polls say before Election Day in those states four years ago?

In Florida, a CNN/USA Today/Gallup poll conducted about a week before Election Day showed Bush leading Kerry 51 percent to 43 percent. The poll had a margin of error of plus or minus 4 percentage points and was conducted October 21 through October 24.

Kerry caught up to Bush in the polls before Election Day and led by a single point, 48 percent to 47 percent, in a similar poll conducted October 28 through October 31. The poll had a margin of error of plus or minus 3 percentage points. Bush won Florida by 5 percentage points in 2004.

In Ohio four years ago, a CNN/USA Today/Gallup poll showed Kerry leading Bush by a point -- 49 percent to 48 percent -- about two weeks before Election Day. The poll was conducted October 17 through October 20 and had margin of error of plus or minus 4 points.

A week before November 7, Election Day, a similar poll showed Kerry leading Bush 50 percent to 46 percent. The poll was conducted October 28 through October 31, and the margin of error was plus or minus 3 percentage points. Bush won Ohio by 2 points in 2004, 51 percent to 49 percent.

Obama leads McCain in recent CNN poll of polls conducted in both states. In Florida, he leads McCain 49 percent to 45 percent. The polls were conducted October 23 through October 26.

In Ohio, Obama has an 8-point lead over McCain, 50 percent to 42 percent. The polls were conducted October 22 through October 27.

There have been a few examples of such "buyer's remorse" in recent history, Silverleib said.

"We saw that with [Arkansas Gov. Bill] Clinton in 1992, when the polls suddenly tightened up during the last week," he said. "It was almost like people saying, 'Do we really want this guy?' "

In another example, polls tightened during the 1968 presidential race between Republican Richard Nixon and Democrat Hubert Humphrey. Nixon led by double digits among registered voters in late September, according to a Gallup analysis published Monday.

The lead dwindled to 8 points in a poll conducted October 17 through October 22. By early November, Nixon was clinging to a 1-point lead. The poll was conducted October 29 through November 1 and surveyed likely voters, according to Gallup.

"Humphrey had all the momentum at the end, and there's an open question there that had that election gone on for another week, Humphrey might very well had won," Silverleib said.

There is then the oft-cited example of Thomas Dewey and Harry Truman in 1948. Polls predicted that Dewey would win, but Truman pulled off the upset.

Silverleib, however, is reluctant to cite that race as illustrative of the accuracy of contemporary polls.

"People talk about Dewey and Truman, but they stopped polling a couple of weeks before the election," he said, adding, "polling then wasn't nearly as refined a science as it is now."

However, in what might be a bit of sobering news for the McCain campaign, since 1956, front-runners in late October lost the popular vote only twice after being ahead in the Gallup poll a week before Election Day, according to that polling organization's analysis.