(CNN) -- Some aides to Sen. John McCain say they weren't happy that running mate Sarah Palin went off script Sunday and turned attention back to the controversy over her wardrobe. 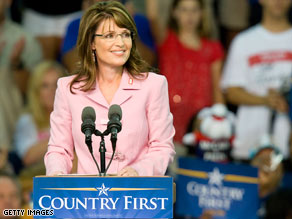 Alaska Gov. Sarah Palin deviated from her prepared remarks to talk about her wardrobe controversy Sunday.

The Alaska governor on Sunday brought up the recent reports regarding the Republican National Committee's $150,000 spending spree on clothing and accessories for the Palin family.

Palin denounced talks of her wardrobe as "ridiculous" and declared emphatically: "Those clothes, they are not my property."

"Just like the lighting and the staging and everything else that the RNC purchased, I'm not taking them with me," she said at a rally in Tampa, Florida.

A senior McCain adviser told CNN that those comments "were not the remarks we sent to her plane." Palin did not discuss the wardrobe story at her rally in Kissimmee, Florida, later in the day.

A Palin aide, however, told CNN that the governor clearly felt like she had to say something to defend herself, because "that's really not who she is."

Over the weekend, sources told CNN that long-brewing tensions between Palin and key aides to McCain were on the rise.

Several McCain advisers suggested that they have become increasingly frustrated with what one aide described as Palin "going rogue."

McCain sources say Palin has gone off-message several times, and they privately wonder whether the incidents were deliberate. They cited an instance in which she labeled robocalls -- recorded messages often used to attack a candidate's opponent -- "irritating" even as the campaign defended their use. Also, they pointed to her telling reporters she disagreed with the campaign's decision to pull out of Michigan.

A second McCain source says she appears to be looking out for herself more than the McCain campaign.

"She is a diva. She takes no advice from anyone," this McCain adviser said. "She does not have any relationships of trust with any of us, her family or anyone else.

"Also, she is playing for her own future and sees herself as the next leader of the party. Remember: Divas trust only unto themselves, as they see themselves as the beginning and end of all wisdom."

Watch more on the 'diva' criticism »

But this Palin source acknowledged that Palin is trying to take more control of her message, pointing to an impromptu news conference on a Colorado tarmac last week.

CNN contributor and Republican strategist Ed Rollins said Palin was "mishandled" during the earlier part of the campaign, and as a result, "she's become a target of a lot of ridicule."

But, he said, "She definitely is going to be the most popular Republican in this country when this thing is over."

The Politico reported Saturday on Palin's frustration, specifically with McCain advisers Nicolle Wallace and Steve Schmidt. They helped decide to limit Palin's initial media contact to high-profile interviews with Charlie Gibson of ABC and Katie Couric of CBS, which all McCain sources admit were highly damaging.

In response, Wallace e-mailed CNN the same quote she gave the Politico: "If people want to throw me under the bus, my personal belief is that the most honorable thing to do is to lie there."

But two sources, one Palin associate and one McCain adviser, defended the decision to keep her media interaction limited after she was picked, both saying flatly that she was not ready and that the missteps could have been a lot worse.

They insisted that she needed time to be briefed on national and international issues and on McCain's record.

"Her lack of fundamental understanding of some key issues was dramatic," said another McCain source with direct knowledge of the process to prepare Palin after she was picked. The source said it was probably the "hardest" to get her "up to speed than any candidate in history."

Yet another senior McCain adviser lamented the public recriminations.

"This is what happens with a campaign that's behind; it brings out the worst in people, finger-pointing and scapegoating," this senior adviser said.

This adviser also decried the double standard, noting that Democratic nominee Sen. Barack Obama's running mate, Sen. Joe Biden, has gone off the reservation as well, most recently by telling donors at a fundraiser that America's enemies will try to "test" Obama.

Tensions like those within the McCain-Palin campaign are not unusual; vice presidential candidates also have a history of butting heads with the top of the ticket.

John Edwards and his inner circle repeatedly questioned Sen. John Kerry's strategy in 2004, and Kerry loyalists repeatedly aired in public their view that Edwards would not play the traditional attack dog role with relish because he wanted to protect his future political interests.

Even in a winning campaign like Bill Clinton's, some of Al Gore's aides in 1992 and again in 1996 questioned how Gore was being scheduled for campaign events.

Jack Kemp's aides distrusted the Bob Dole camp and vice versa, and Dan Quayle loyalists had a list of gripes remarkably similar to those now being aired by Palin aides.

CNN's John King and Peter Hamby contributed to this report.