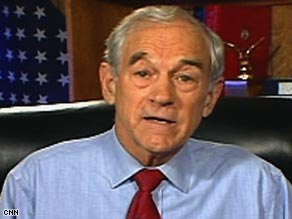 Rep. Ron Paul says that what really needs regulating is the Federal Reserve.

Paul, a Republican from Texas, spoke from his home in Clute, Texas. The topic of the discussion was the current economic crisis and the Capitol Hill testimony Thursday of former Fed chief Alan Greenspan.

John Roberts, CNN anchor: Up there on the Hill, Alan Greenspan was basically saying, "Oops, I missed this one, sorry about it," but he was optimistic for the future. Congressman Paul, do you even listen to him anymore?

Rep. Ron Paul: I have to because somebody like you might ask me a question about him.

No, I don't really listen in the sense that I'm going to get a lot of new information. I used to listen to him when he was writing back in the '60s because he agreed with free market economics and no respect for the Federal Reserve.

Lately, though, I mean, he's been part of -- and right now he's really gotten bad because what he was saying yesterday was that the only place where he might have made a mistake is he didn't advocate more regulations.

Well, if you're a true free market person it isn't the lack of regulations. Trying to regulate and improve on the conditions that the government creates. I mean we created this problem. The Federal Reserve created this. The Community Reinvestment Act created it. The FDIC created it. Fannie Mae and Freddie Mac created it.

It was all seen there but now he says if we could have only had more regulations ...

Paul: ... we could have salvaged this clogged system.

Roberts: Well, you believe that markets can be or should be self-regulating?

But just regulating prices -- that's what they're doing now, they're trying to regulate prices and set prices for these assets that hasn't -- have no value. So, no, that's not the kind of regulation we want, but there is certainly a role for regulations.

Roberts: Well, regardless of what we talk about this morning, the Dow is going to go off a cliff again today so let me turn to politics if I could.

A lot of people have said, particularly because of the economy, this is a bad year to be a Republican. John McCain behind in the national polls, seems to be behind in the battleground states as well. He's got a long and difficult road if he hopes to win the Oval Office.

If Republicans really take a beating, Congressman Paul, on November the 4th, where does that leave the Republican brand?

Paul: Well, I think they're in big trouble, but I think I mentioned that a year or so ago, that they've sort of lost their way. No, it's going to be a lot worse, but you have to say that the markets aren't being reassured about the obvious victory that's going to occur.

Then they said, "Oh, my, you know, we're going to have Obama and a Democratic Congress stronger than ever so things are going to get a lot better." They haven't discounted that yet.

The country is in a mess regardless, but I think the Republican Party really in a mess because ...

Roberts: How bad a blow could it be and how long might it take the party to rebuild?

Paul: You know, I was first elected -- I first ran in 1974, and I think there were about 145 members of Congress, Republicans, then. It took 20 years. So that is the case. But, you know, I think it's secondary to what the Congress is doing.

If both parties have bad ideas, it doesn't matter a whole lot. Right now ...

Roberts: And I wanted to ask you about ...

That's exactly the difference between Senator McCain and Barack Obama with Barack Obama on top. I mean you could be the spoiler here and take Montana away from Senator McCain, and I know that some Republicans, friendly to you, say hey, get off the ballot in Montana. You tried, you couldn't.

How are you going to feel if because of you McCain loses Montana?

Paul: Well, I think it will be a pretty far stretch if McCain loses the election that they're going to blame me. I haven't been campaigning in Montana. People who are supporting out there are spontaneous. They're enthusiastic. They don't like either candidate.

So I don't think the person whose name they picked is the one that does the spoiling. I think there's something else that is wrong. Maybe it's the flawed policies of both candidates.

Roberts: Congressman Paul, it's always good to see you. Thanks for joining us this morning. We'll check back with you again soon.

Paul: Thank you. Good to be with you.