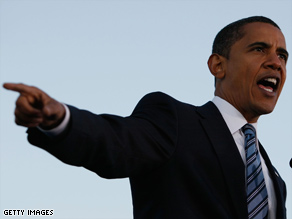 Sen. Barack Obama's campaign has criticized the robocalls, but Democrats are launching them too.

Democrats Barack Obama and Joe Biden have criticized John McCain and Republicans for the calls, but both parties are players in the robocall war.

The McCain campaign launched 12 robocalls in the past six weeks, according to Shaun Dakin, founder of the National Political Do Not Contact Registry.

The Obama campaign has launched at least four robocall campaigns in the past month, according to the registry's Web site.

Voters can block the calls by registering their phone number at StopPoliticalCalls.org. iReport.com: Listen to a campaign message one reader received

iReporter Emmanuel Mallo of Johnson City, New York, said he was frustrated when a McCain robocall awoke his son, causing him to burst into tears.

"You can't be waking up children ... to promote your political agenda," Mallo said. "People are going through stressful times."

Former Republican presidential candidate Rudy Giuliani is the star of a new robocall from the McCain campaign and the Republican National Committee.

In the call, the former federal prosecutor and New York mayor tries to paint Obama as soft on crime, saying the Democrat opposes "mandatory prison sentences for sex offenders, drug dealers and murderers."

"With priorities like these, we just can't trust the inexperience and judgment of Barack Obama and his liberal allies," Giuliani says. Listen: Giuliani narrates the McCain/RNC's latest robocall

The Obama campaign did not have an immediate comment, but according to its Web site, the Illinois senator does support "reforming mandatory minimum prison sentences."

Obama's campaign released its own robocall in Wisconsin in response to what it called McCain's "sleazy phone calls."

According to the Web site Talking Points Memo, the call features Jeri Watermolen, a former McCain backer who has turned to support Obama because of the McCain campaign's calls. iReport.com: Are you receiving robocalls? Tell us about it

"I live in Green Bay, and, like you, I've been getting sleazy phone calls and mail from John McCain and his supporters viciously -- and falsely -- attacking Barack Obama. I used to support John McCain because he honorably served our country, but this year he's running a dishonorable campaign," Watermolen says in the call.

Giuliani's robocall comes a week after the RNC and the McCain campaign sent out a robocall to swing-state voters highlighting the Democratic presidential candidate's connection to 1960s radical William Ayers. Fact check: Obama's ties to Ayers

The calls are part of a $70 million last Republican push to get out the vote for McCain, using calls, mailings and door-knocking in battleground states.

Biden on Tuesday challenged McCain to "stop those ads."

"If John McCain is serious when he said this morning, 'This election is about the economy,' then I say, John, take down your robocalls. Stop what you're doing, John. Debate the economy, not lies about Barack's character," he said.

But Dakin said voters can expect the calls to keep pouring in during the final days of campaigning.

"It's essentially the spam of this elections cycle. They've become so cheap, so ubiquitous, at every level of every race, so particularly if you live in a battleground state, our members are reporting getting 10 to 15 calls a day. That's only going to increase," he said.

CNN's Alexander Mooney and Emily Sherman contributed to this report.