(CNN) -- A new Republican ad appears to suggest that Barack Obama has all but won the presidential race, an argument several vulnerable Senate Republicans may have to reluctantly embrace with only days until Election Day, an expert in campaign advertising said. 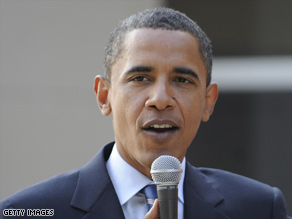 Some Republicans are already planning on a Barack Obama presidency.

Aimed at Kay Hagan, Sen. Elizabeth Dole's surprisingly strong Democratic challenger in North Carolina, the 30-second spot from the National Republican Senatorial Committee warns voters against Democrats holding the White House and Congress, and flatly states that if Hagan wins, the party will "get a blank check."

"These liberals want complete control of government in a time of crisis, all branches of government," the ad's narrator states. "No check and balances, no debate, no independence. That's the truth behind Kay Hagan. If she wins, they get a blank check."

Committee Online Communications Director John Randall denied that the ad is suggesting that GOP nominee John McCain will lose out on the White House.

"The NRSC is not conceding a Barack Obama presidency," he said. "Fiscally irresponsible liberals like Kay Hagan are not the answer in these tough economic times and would only make things worse. Our ad was intended to highlight Hagan's many failings in light of the Democrats' promise to close debate should they control the executive and legislative branches of the federal government."

But with polls warning of a GOP bloodbath November 4, vulnerable senators in red states may have no other option but to suggest that Obama will capture the White House and warn that the Illinois senator needs to be checked by Senate Republicans.

Watch more on the fight for battleground states »

"They are basically painting the picture that the presidential race is over," said Evan Tracey of Campaign Media Analysis Group, CNN's consultant on ad spending. "Overall, people prefer divided government. This is that divided government argument: 'Don't hand sole control over to one party.' "

The GOP isn't aiming to regain control of the evenly split Senate but to ensure that Democrats don't reach 60 seats in the chamber -- the "magic number" that seemed unthinkable only a few months ago.

Should Democrats reach that number, the party could prevent Republicans from filibustering bills they oppose, and the GOP would be unable to block legislation they are against from going through.

The last time either party held such an edge was in 1977, when Democrats held 61 Senate seats and Jimmy Carter was president. It seems increasingly likely this year, with the economy flailing, the Republican brand in tatters and a Democratic presidential nominee who is causing extraordinary voter enthusiasm.

Vulnerable Senate Republicans in red states are hoping the doomsday scenario will cause enough independent-leaning voters to stick with them, even if they largely blame the GOP for the country's current conditions.

Watch more on the GOP's troubles »

"You're going to see it in a lot of places these last 10 days, where you have vulnerable Republicans, because ultimately survival instincts are going to take over here," Tracey said. "It's going to be less about whoever else is running and more about, 'How do I save myself?' "

Dole, once among the most popular figures in the GOP and head of the National Republican Senatorial Committee in 2006, has become perhaps the most vulnerable of the red state Senate Republicans in what might be the clearest sign of the GOP's woes this election season.

But the divided government argument may only further highlight McCain as a candidate who has already lost, even as the Arizona senator and his running mate head to a string of red states to convince voters that the race isn't over.

"There's risk for the party in this argument," Tracey said, "but people have specific mandates above the party mandates, and survival instincts are going to take over at some point."