The problem with Palin 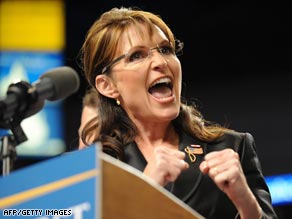 Independent voters have turned against Sarah Palin in recent polls.

But how many typical moms get $150,000 worth of merchandise from stylish stores and have strangers pay for it?

This week's revelation about the purchases was just one more surprise in the fast rise and apparent fall of the Republican Party's sudden superstar.

Remember, it was only two months ago that Palin was just the popular governor of Alaska, still an obscure figure in American politics. That changed in late August when John McCain chose her as his running mate.

Within days, she was generating the biggest excitement the McCain campaign had ever enjoyed, captivating the Republican Party, swelling the crowds at its rallies and drawing media coverage that overshadowed the Democrats.

One McCain advisor told me then that one of the practical problems she discovered as she criss-crossed the country was that she didn't bring enough clothes.

It seems her family didn't have enough clothes either, because suddenly there was some serious shopping.

A single visit to the fashionable department store Neiman Marcus cost more than $75,000, but that was only half of the total. The bills ultimately went to the Republican Party, which means that although they probably didn't know it, party donors paid for them.

Palin's problems go beyond clothes, though, to her very candidacy. In recent days, prominent Republicans, from former Secretary of State Colin Powell to Reagan speechwriter Peggy Noonan, have publicly criticized her lack of experience.

Ordinary Americans agree. An NBC/Wall Street Journal poll found that in early September, when Palin was just starting out as a candidate, 47 percent of voters had a positive opinion of her, compared to 27 percent who felt negatively.

And the new poll found that concern about Palin's qualifications is voters' top concern about McCain, ahead of every other issue in the election.

Voting day is less than two weeks away and most polls suggest that Barack Obama is headed for victory. The surprise is that Palin went from being McCain's best asset to his biggest problem. And the Republicans don't have much time, or an obvious way, to fix it.