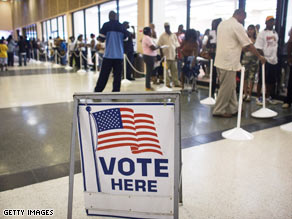 Voters line up Monday in Fort Lauderdale, Florida, to cast their ballots early.

The numbers indicate a record percentage of voters could participate in the presidential election, a voting expert said.

Michael McDonald, an associate professor of politics and government at George Mason University, said at least 2.2 million people already have voted using absentee or other types of ballots that allow them to vote before the polls open on November 4.

Fifty-six percent, of those voting early in North Carolina were Democrats, while 28 percent were Republicans and 16 percent were not registered as a member of a party, the elections board said.

Officials in Houston, Texas, said more than 39,000 people voted on the first day of early voting Monday, nearly double the amount for the initial day in 2004, CNN affiliate KHOU-TV in Houston reported.

A record number of voters lined up to vote when Florida opened its early voting stations Monday, with some waiting hours to cast their ballots. The early polling stations will remain open until the weekend before Election Day.

In Sarasota County, 4,700 people cast ballots Monday, compared with 2,088 on the first day four years ago, Davis said, leading officials there to believe that half the county's ballots could be cast before November 4.

The Jacksonville Times-Union reported long lines in northeast Florida, with at least two counties reporting problems with voting machines. In Duval County, 7 of 15 optical scanning machines used to count ballots had to be replaced, the newspaper reported.

The number of voters who already have cast their ballots could be much higher, McDonald said, because many states have not reported the number of ballots they have received so far.

Early voting suggests a record 213 million people are eligible to vote this year, said McDonald, who also works with the consortium that conducts election exit polling for broadcast and news networks.

"This will be the election in which the most people have ever voted in an American election in the history of our country," he said.

McDonald said early voting is often a good prediction of the level of turnout on Election Day, and heavy early voting indicates the turnout this year will exceed the 60 percent turnout in the 2004 election.

"We have a very good chance of beating the 64 percent turnout in the 1960 election," McDonald said. "We really could be looking at a historic election in modern American history."

That race saw the highest level of turnout in American history, except the 66 percent turnout in the 1908 presidential election.

McDonald pointed to the record number of early votes already cast in Georgia as an example of the high interest in the race.

More than 690,000 Georgians already have voted, more than the entire number that cast ballots before Election Day in 2004, McDonald said. That figure represents nearly 21 percent of all the 3.3 million presidential votes cast in 2004, he said.

"If we see this persist across all states, we really could be in for an election of historic proportions," McDonald said.

Of Georgians who have voted early, a majority, 56 percent, were women, according to the Georgia secretary of state's office. About 60 percent of those voting were white, while 35 percent voting early were black, the office said.

Turnout was so heavy in Charlotte, North Carolina, that Mecklenburg County officials are extending voting hours and opening 20 voting sites this weekend instead of the originally planned five, WSOC-TV in Charlotte reported.

When early voting began in Virginia last Wednesday, election officials in Mason District, in the northern Virginia county of Fairfax, had to turn their largest meeting room into a seating area to handle the number of voters wanting to cast early ballots.

"We needed to have enough room for people, so they wouldn't go into the parking lot," Supervisor Penny Gross said.

Gross said she had expected large numbers because "I had people in my office for weeks, asking if they could vote," but said even she was caught off guard by the turnout.

"I was pleasantly surprised by the crowd, surprised at the variety and quite frankly, the numbers," she said.

All About Elections and Voting • Florida