WASHINGTON (CNN) -- A new national poll suggests that only a quarter of Americans think things are going well in the country today, while the rest of those questioned are angry, scared and stressed out. 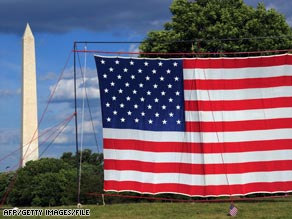 Two-thirds of those questioned say they're scared about the way things are going in the U.S.

Seventy-five percent of those surveyed in a CNN/Opinion Research Corp. poll released Tuesday said things are going badly in the United States.

"It's scary how many Americans admit they are scared," said Keating Holland, CNN's polling director. "Americans tend to downplay the amount of fear they have when facing tough times. The fact that more than six in 10 say that they are scared shows how bad things are getting."

The 25 percent who said things are going well in the country is another indicator of the negative mood among Americans.

"Prior to 2008, we have seen that level of dissatisfaction only three times in the past four decades -- during Watergate, the Iranian hostage crisis and the recession of 1992," Holland added.

The survey also suggests that most Americans are not happy with President Bush. Seventy-two percent of those questioned disapprove of the president's handling of his job.

Watch what Bush has to say about the economy »

The war in Iraq also continues to be unpopular with Americans, with 32 percent of those questioned favoring the war.

The CNN/Opinion Research Corp. poll was conducted Friday through Sunday, with 1,058 adult Americans questioned by telephone. The survey's sampling error is plus or minus 3 percentage points.