Prosecutors grill Stevens as trial comes to a close

WASHINGTON (CNN) -- Prosecutors grilled Sen. Ted Stevens on Monday about whether he accepted gifts as a lawmaker. 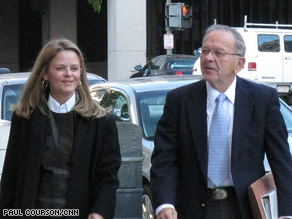 The defense rested its case after prosecutors sparred with the Republican senator, who is charged with breaking Senate ethics rules by failing to disclose hundreds of thousands of dollars in gifts and renovations on his home in Alaska.

Stevens, the longest-serving Republican senator in history, battled with prosecutor Brenda Morris during his three days on the stand.

They tangled over whether a massage chair in Stevens' home was a gift or a loan, with Stevens asserting he had told his friend and neighbor, Bob Persons, he could not accept a gift under Senate rules.

"He said it was a gift, and I said I could not take it," Stevens insisted, recalling details of the purchase in 2001.

"But you kept it?" Morris asked.

"It's still there," Stevens replied, acknowledging the chair is at his townhouse in Washington.

The prosecution has been trying to show that Stevens failed to disclose about $250,000 worth of goods and services provided for his Alaskan home over the course of about seven years. Senators are required to report gifts on forms that are filed annually.

Prosecutors dueled with Stevens over specifics about the chair in an effort to show that he was crafty in his ability to find ways around reporting the gifts or providing full disclosure about them.

In his second day on the stand, Stevens testified that he and his wife paid for all the improvements on their Alaska chalet, which was extensively remodeled about eight years ago.

He also attempted to address a series of e-mails that prosecutors introduced earlier in the trial.

During cross-examination, Stevens stood firm in his denials of wrongdoing through testy exchanges with Morris, who accused him of trying to "cover your butt" with a series of e-mails asking about invoices and billing.

His defense team responded that former Alaska businessman Bill Allen, who arranged much of the the work on Stevens' home, quashed bills without Stevens' knowledge. Allen has pleaded guilty to trying to bribe a number of Alaska state officials -- not including Stevens -- and was the prosecution's star witness.

Stevens is not charged with taking bribes.

He was the last witness for the defense. Closing arguments are expected Tuesday, with jury deliberations expected to begin Wednesday.