(CNN) -- Sen. Barack Obama will take a break from campaigning Thursday so he can visit his ailing grandmother in Hawaii, an Obama spokesman said Monday. 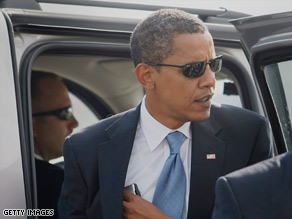 Sen. Barack Obama will take a break from campaigning so he can visit his ailing grandmother.

"Sen. Obama's grandmother Madelyn Dunham has always been one of the most important people in his life," spokesman Robert Gibbs told reporters.

"In the last few weeks, her health has deteriorated to the point where her situation is very serious. It is for that reason that Sen. Obama has decided to change his schedule on Thursday and Friday so that he can see her and spend some time with her," Gibbs said.

The interruption will cause Obama to cancel Thursday events in Madison, Wisconsin and Des Moines, Iowa. He will do an event in Indianapolis, Indiana, Thursday morning before leaving and will return to the campaign Saturday, Gibbs said.

Michelle Obama will fill in for her husband on Friday at previously scheduled events in Columbus and Akron, Ohio, his campaign said.

Obama speaks about his grandmother often on the stump, describing her as an integral figure in his youth who struggled against the glass ceiling in to make a better life for him.

"She's the one who put off buying a new car or a new dress for herself so that I could have a better life," he said in his acceptance speech at the Democratic National Convention in August. "She poured everything she had into me. And although she can no longer travel, I know that she's watching tonight, and that tonight is her night as well."

He and his family traveled to Hawaii in August to visit her.

The Obama team made the announcement after a busy day of trading attacks with Sen. John McCain on the Democratic presidential hopeful's readiness for office.

Clinton went to Florida, a state she won in the primary but whose delegates she could not claim, to urge her supporters to turn out for Obama on Election Day.

Earlier in the day, McCain told a crowd in Belton, Missouri, that the next president "won't have time to get used to the office."

He was addressing comments made Sunday by Obama's running mate, Sen. Joe Biden, in which he said Obama would be tested within the first six months of his presidency.

"We don't want a president who invites testing from the world at a time when our economy is in crisis and Americans are already fighting in two wars," McCain said. "What is more troubling is that Sen. Biden told their campaign donors that when that crisis hits, they would have to stand with them because it wouldn't be apparent Sen. Obama would have the right response.

"With our nation facing two wars and 21st century threats abroad, Sen. Biden referenced the simple fact that history shows presidents face challenges from day one," Obama spokesman David Wade said. "After eight years of a failed foreign policy, we need Barack Obama's good judgment and steady leadership, not the erratic and ideological Bush-McCain approach that has set back our security and standing in the world."

Obama added that Alaska Gov. Sarah Palin, McCain's running mate, rejected some of the tactics when she spoke out against a flood of automated phone calls tying Obama to former radical William Ayers. The calls were reported in several battleground states.

"It's getting so bad that even Sen. McCain's running mate denounced his tactics last night," Obama said at a campaign event in Tampa, Florida. "As you know, you really have to work hard to violate Gov. Palin's standards on negative campaigning."

Sunday night, Palin told reporters traveling with her that if she had her way, the McCain campaign and the Republican National Committee would not be flooding battleground states with the automated phone calls, which she said the Obama campaign was using too.

Over the next 15 days, Obama said Monday, he will continue his quest for the Oval Office while disregarding the divisive politics that he said McCain is endorsing "to keep us from working together."

The McCain campaign, meanwhile, continued its weekend assault on Obama's tax plan, which it called an attempt to "spread the wealth." iReport.com: Send your questions for Sen. John McCain

Speaking at a campaign event in St. Charles, Missouri, a chorus of boos rang out as the Arizona senator described his take on the plan.

"He believes in redistributing wealth -- not in policies that grow our economy and create jobs and opportunities for all Americans. Sen. Obama is more interested in controlling who gets your piece of the pie than in growing the pie."

In Colorado Springs, Colorado, Palin also continued her line of attack from the weekend, but softened her tone in that she didn't call Obama's plan socialism.

Over the weekend, Palin and Sen. Mel Martinez, a Cuban-American GOP senator from Florida, called Obama's plan socialism. Martinez compared the plan to the tax structure in communist Cuba.

McCain has taken a softer tone. On Sunday, he dodged a question from Fox News' Chris Wallace about whether Obama was a socialist, but said his rival's tax plan was an effort "to spread the wealth."

"That's one of the tenets of socialism," McCain said.

Obama's tax plan calls for tax relief for 95 percent of workers and their families. Though nonpartisan tax policy organizations agree that 40 percent of Americans don't pay income tax, many of those are lower-income earners who file payroll taxes through their employers. See the fact check

After receiving an endorsement from Colin Powell, a former Republican secretary of state and retired Army general, Obama asked if Powell and billionaire Warren Buffett -- No. 2 on Forbes magazine's 2008 list of richest Americans -- would have extended their backing if he was a socialist.

Obama said he simply wants to give the middle class a tax cut.

Powell came to Obama's defense after endorsing the senator from Illinois.

Powell said he had grown tired of McCain's negative campaigning and that the American people would prefer to focus on issues like education, infrastructure and the economy. He specifically slammed Palin's allegation that Obama's tax plan is socialist, calling it misleading. iReport.com: What do you think about Powell's endorsement?

"For us to say that makes you a socialist, I think, is an unfortunate characterization that isn't accurate."