WASHINGTON (CNN) -- The news over the weekend that former Republican secretary of state and ex-chairman of the Joint Chiefs of Staff Colin Powell is endorsing Barack Obama was hardly unexpected. 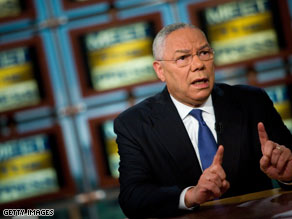 Colin Powell said the approach of the Republican Party and McCain has gotten "narrower and narrower."

Powell had been courted by Obama for months, as the junior senator from Illinois sought him out for advice on everything from Iraq to North Korea and all things geopolitical.

And while Powell counts himself as a friend of Sen. John McCain, there was always foreboding in the McCain camp that Powell would, in the end, gravitate towards Obama and his historic candidacy.

Yet the Powell endorsement was not just a pro-forma, "he's my guy" announcement. Instead, in supporting Obama, Powell decided to get specific -- and not only about McCain's uneven performance during the financial crisis and his judgment (or lack thereof) in choosing Sarah Palin as his running mate.

In fact, what was most notable was Powell's dire assessment of the state of the GOP: "The party has moved even further to the right," he said, adding that, "over the last seven weeks, the approach of the Republican Party and Mr. McCain has become narrower and narrower."

That's the key indictment, and the key problem, for the GOP. While the political world shifts towards independent voters -- who, by nature, are more about pragmatism than dogma -- the Republican Party remains unable to redefine itself back into a working majority. Watch the effect of Powell's endorsement

Is it still the party of Ronald Reagan? Or has it moved beyond Reagan's innate optimism and into a party that wants to build fences and demand ideological purity? Or can it come up with new ideas that could eventually provide some rejuvenation?

Truth is, after more than a decade of political dominance, the GOP is out of steam and on the verge of a civil war -- with factions splitting among the foreign-policy hardliners, the tax-cutters and the social conservatives.

What's more, the party that had distinguished itself in the 1990s era of Newt Gingrich and his revolutionaries is now suffering from the political gout that afflicts the powerful when they get too comfortable.

It happened to the Democrats when Gingrich and his backbenchers took over the House in 1994; they rightly retreated to find themselves again. Some Republican thinkers are now begging their party to do the same.

In a way, the GOP's problems are precisely why McCain got nominated: He was the last man standing in an array of candidates who represented all parts of the GOP ideological spectrum.

The GOP brand may have been tarnished, but McCain's appeal was that he wasn't really a part of that brand. He was the maverick, the guy who took on his own party and the special interests. The appeal went beyond the GOP. Independent voters liked the sound of it, too.

But McCain had to get nominated in the GOP, and the rest is history. And now McCain and Obama are locked in a struggle for those independent voters, and McCain is suffering.

In the end, as Powell pointed out, the choice of Palin -- which did so much to unify the base of the party -- may well be the moment those independent voters decided to look somewhere else.

Powell may have been speaking for those folks when he called the GOP preoccupation with William Ayers as "demagoguery" and a distraction from the serious issues of the day.

John Avlon, an expert on independent voters, points out in Monday's Wall Street Journal that they have grown exponentially in the past couple of decades.

"Now, two out of five Americans can't name anything they like about the Democrats," he wrote, "and 50 percent say the same about Republicans."

They hate pork-barrel projects -- hence, McCain. Yet they're not social conservatives, but Palin is -- big-time.

So in trying to "balance" his ticket for the GOP, McCain may well have thrown away his greatest asset -- this appeal to voters who thrive on unification, not division.

It's Powell's key point and certainly drove his vote. The fear among Republicans is Powell was not only speaking for himself.