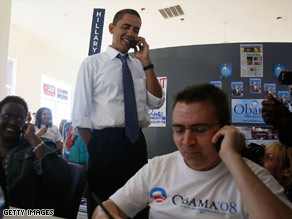 Barack Obama calls a prospective voter from a headquarters in Kansas City, Missouri, on Saturday.

In a campaign video, Obama campaign manager David Plouffe said a record 632,000 new donors gave to the campaign, with the average contribution under $100. More than 3 million donors have given so far.

Regardless of the stunning haul, Plouffe told supporters the campaign still needed more money because of "the slime that we're getting from the McCain campaign." Plouffe cited recent attack ads and automated phone calls in battleground states and said the campaign needed to have every resource to "fight back."

"Their campaign is going to descend even more into the gutter," he said.

Plouffe also said the campaign was expanding its reach to compete "aggressively" in West Virginia.

Tightening polls in Georgia and North Dakota meant more money and resources could be sent to those two states in the remaining days, he said.

"We can't afford to make any cuts. We have to execute everything we think is required to win," Plouffe said of their battleground strategy. "None of us can look back on the night of November 4 or the morning of November 5 and wished we had done something extra."

The McCain campaign accepted $85 million in federal matching funds for the last two months of the campaign.

The Obama campaign opted out of the matching funds program and is free to raise and spend as much money as it can.

CNN's Paul Steinhauser and Sasha Johnson contributed to this report.