U.S. Rep. Ron Paul, who has been an opponent of the government's bailout plan, spoke Friday with CNN's Kiran Chetry on "American Morning." 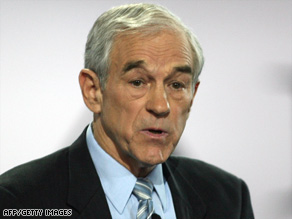 Ron Paul: "Give up on this idea that inflation solves everybody's problems."

The Texas Republican says the bailout's infusion of government money will lead to inflation, that our current monetary system is coming to end, and the market, not politicians, can best solve the economic crisis.

Kiran Chetry: The last time you were with us you explained why you were against the government's bailout plan, why you were voting against it, and you didn't believe focusing on buying these troubled assets was the smart thing to do. Since then, they've tweaked it and decided to buy stakes in some U.S. banks. Do you think that's a better strategy to help heal the economy?

U.S. Rep. Ron Paul: They tweaked it up. It started out as a three-page document and went up to 450 pages. Instead of $700 billion it's up to $850 billion. Reuters had a story out today. They estimate it's going to cost the American taxpayer about $5 trillion. It's tweaking in the wrong direction, and I don't think it's going to do any good whatsoever.

Chetry: The credit markets are starting to loosen up a bit, at least from what we've seen this week. Is that a sign that maybe it is working?

Paul: Maybe to some degree in the short run, but that just means we'll have more inflation. You can't create $5 trillion out of thin air and not expect inflation. So although the dollar may be up a little bit right now because the markets are a little calmer, this just means that in time we're going to all suffer and pay for this, and we're going to pay for it with higher prices.

Besides, economically, it's a disaster. This is going to cause a great deal of harm. It's like a drug addict taking a strong fix, and he feels better for a day or two, but believe me, we're going to kill the patient. And the patient here is the dollar system and our entire world economy. I would say let's get off this addiction.

Chetry: Congressman, have you heard anything from either of the presidential candidates about their economic plans that you think are good things that need to be implemented?

Paul: No, not really, but it's tough to find out the good parts. I do think that John McCain has a better approach to the medical problem, and Obama has a better approach to trying to save some money by coming home from Iraq. We're spending $10 billion a month over there. We could save a lot of money, and that money should be spent back here. Quite frankly, how can we trust anybody? When it comes to the bailout, how do they differ? Both McCain and Obama come rushing back to Washington and vote for the bailout.

Chetry: It was approved in both houses. I know you voted against it. That leads me to another question. If Barack Obama ends up winning, it looks like the Democrats would have a trifecta in Congress, both houses and the White House. What does that mean for the American people and also for the GOP?

Paul: I mean, it's a disaster for the country and everybody because, even with all the shortcomings of John McCain, his strongest argument to be president is keep the Congress and the presidency in separate hands. The American people are going to be a lot better off if they're fighting a little bit instead of just having no restraints whatsoever. That's a poor reason to argue for McCain.

Chetry: I know what you're saying. Staff members writing on your own Web site say the Democratic takeover of both houses of Congress and the White House this November would be a "repudiation of false conservatism of the Republican Party." How do you get back to some of those fiscally conservative ideals?

Paul: It's going to be tough because you have to convince the American people that that's what we need. And everybody now is realizing in the country there's something seriously wrong with our whole financial system and our governmental system.

Get the government out of this overregulation, and give up on this idea that inflation solves everybody's problems. If inflation, that is the creation of new money, could solve everybody's problems, which they're claiming right now, nobody would ever have to work again. If $5 trillion could save this economy, why work? Just print money, and everybody will be happy.

They don't understand the idea that people have to work. People have to save, instead of consumers spending more money.

The market is saying you should back off, spend less money, and save money. Everybody says, no, don't save money. You're supposed to go out there and spend money.

The people who have saved in the last five years have money in the bank, and cash is good right now. They're going to buy up the bargains. They're going to get a good deal on a house. Prices on houses should come down. We shouldn't keep them artificially high. We shouldn't try to stimulate housing. There are too many houses. We should let the market make these decisions.

It's arrogant for the politicians and the bureaucrats to believe they can plan the economy and sort this all out. We've been doing it for all these years, and the monetary system is so confusing and so corrupt, that the sooner we get back to believing in ourselves, believing in freedom, believing in sound money, believing in the Constitution, we're going to solve these problems.

Right now there's a fight going on in this country. Our numbers are growing. We're not the majority, but our numbers are growing. And as this situation deteriorates, more people are going to say, hey, maybe it's right. Maybe limited government and freedom works. Maybe freedom is popular, and maybe freedom really works. And this idea that we have to depend on government for all these programs is an illusion.