(CNN) -- Sen. John McCain and his running mate Gov. Sarah Palin are on a mad dash to blunt Sen. Barack Obama's surging momentum and hold the states that have traditionally voted for Republicans. 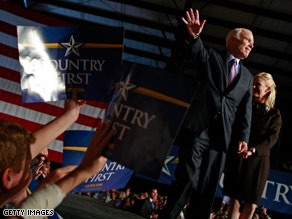 As Obama seeks to expand his electoral playing field in hopes of racking up a decisive win, McCain and Gov. Sarah Palin headed south to states President Bush carried handily in 2004 and ones that haven't voted for a Democratic presidential candidate in more than four decades.

McCain is set to spend part of Friday crisscrossing Florida, a state that has a history of flirting with both parties during presidential campaigns, but one that has usually ended up in the Republican column come Election Day.

He then heads to North Carolina, a state that hasn't voted for a Democratic presidential candidate in decades, but one where recent polls suggest the race is a dead heat.

Palin, who campaigned in North Carolina on Thursday afternoon, heads to Indiana on Friday, another state that hasn't voted for a Democrat since the 1964 presidential election and hasn't gotten much attention from presidential candidates this close to Election Day.

The visits come at a time when the McCain campaign had hoped to have shored up its support in traditionally red states, but instead is focusing its dwindling resources on the conventional battlegrounds that usually decide presidential elections.

A string of new surveys showing Obama making significant gains in onetime Republican strongholds has left the Arizona senator with little choice but to defend states that are still relatively friendly to the Republican brand.

Watch Obama warn his supports not to get 'cocky' »

"Bill Clinton was the last Democrat to win the White House. He never saw a map that looked anything like this, especially this close to Election Day," CNN chief national correspondent John King said.

According to CNN's latest analysis of the electoral map, only six states are up for grabs (Nevada, Colorado, Missouri, Ohio, North Carolina and Florida) and they were all won by President Bush in 2004. That means even if McCain were to go 6-for-6 in the current tossup states, he would still fall short of the 270 electoral votes needed to capture the White House.

So as McCain fights to hold on to states President Bush won in 2004, he needs to peel off states that currently appear to clearly be in Obama's column.

But with limited time and resources, a state-by-state offensive appears no longer possible for the Republican presidential candidate.

"He has to change the big fundamental, he can no longer do this state by state," King said.

But while McCain has largely been absent from several of these traditionally red states all summer, the Obama campaign has aggressively built ground organizations in many of these states, outspent its GOP rival considerably on staff and television commercials, and worked to register tens of thousands of new voters.

McCain has particularly been badly outcampaigned in North Carolina and Virginia, a key reason Republicans are scrambling to defend those territories.

Watch how Obama has grabbed a lead in Virginia »

And Obama continues to focus on the states once unfriendly to Democratic candidates, planning stops in Virginia on Friday and North Carolina on Saturday.

It appears Obama's strategy is not just to win, but to win decisively, CNN senior political analyst David Gergen said.

"It does seem to me his goal should be two things, to run up the score so he gets a convincing victory, not just a small victory, but a major convincing victory. And try to define what he needs to do as president so he can say the day after the election, I have a mandate," Gergen said.

A recent CNN/Opinion Research Corporation/Time magazine poll out of North Carolina showed the race tied there, while a new CNN poll of polls in Virginia shows Obama with a slight lead. President Bush won both states handily in 2004.

But it's not only the nation's flagging economy that is helping tilt them toward Obama. In addition to the Illinois senator's considerable money advantage, each state has undergone significant demographic shifts over the last two decades that have made Democrats steadily more competitive.

"The North Carolina and Virginia of today are far more diverse than they were 20 or even 10 years ago," CNN senior political researcher Alan Silverleib said. "The states' changing economy has attracted thousands of new voters willing to pull the lever for a Democratic nominee."

Watch how North Carolina has become a battleground »

Then there's the unknown variable of an anticipated increase in turnout in the African-American community. In 2006, that voting bloc made up 26 percent of North Carolina's electorate and 21 percent of the Virginia electorate. Obama will likely win a higher percentage of the black vote this cycle in both states than John Kerry's 87 percent, and unprecedented turnout is expected.

Add to that the trouble McCain faces out west as he loses his grip on Colorado and Nevada, two other states with changing demographics that are helping the Democratic ticket. Each has seen an influx in Hispanic voters in recent years, a voting bloc that had been friendly to President Bush but is overwhelmingly supporting Obama this year.

"Increasingly Republicans are trying to figure out where to spend money and resources, and they are frustrated trying to find a blue state they have a good chance to turn red," King said.