(CNN) -- Democratic vice presidential candidate Joe Biden ripped into recent comments by his Republican counterpart that suggested that some places in the U.S. are more "pro-America" than others. 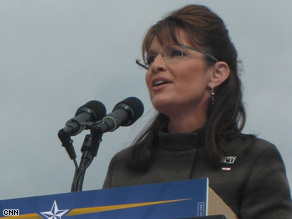 "We believe that the best of America is in the small towns that we get to visit, and in the wonderful little pockets of what I call the real America, being here with all of you hard-working, very patriotic, very pro-America areas of this great nation," she said.

On Friday, Palin clarified her comments.

"It's all pro-America. I was just reinforcing the fact that there, where I was, there's good patriotic people there in these rallies, so excited about positive change and reform of government that's coming that they are so appreciative of hearing our message, hearing our plan. Not any one area of America is more pro-America patriotically than others," she said.

At a rally in Mesilla, New Mexico, on Friday, Biden responded to those comments in a vociferous tone.

"I hope it was just a slip on her part and she doesn't really mean it. But she said, it was reported she said, that she likes to visit, 'pro-American' parts of the country," he said to loud boos.

The candidates and their running mates were spread out across the country, with Palin traveling to Ohio and Indiana; McCain in Florida; and Biden in New Mexico and Nevada.

Obama was in Virginia, a traditional Republican state that has not backed a Democrat for president since Lyndon Johnson in 1964. But according to a CNN/TIME/Opinion Research Corp. poll conducted October 11-14, Obama has opened up a 10-point lead over McCain, 53 percent to 43 percent.

"It's like those ads for prescription drugs. They start out and everybody's running in the fields and everybody's happy, then there's a little fine print that says, you know, the side effects they may include," Obama said to laughter from the crowd.

He also highlighted McCain's plan to tackle the Medicare system, which provides health benefits for senior citizens and others.

"It turns out, Sen. McCain would pay for part of his plan by making drastic cuts in Medicare -- $882 billion worth ... to pay for an ill-conceived, badly thought-through health care plan that won't provide more health care to people -- even though Medicare is already facing a looming shortfall," he said.

Shortly after Obama's speech, McCain spokesman Tucker Bounds said in a statement that unlike Obama's "risky plan," McCain's plans "do not punish struggling businesses with fines and taxes, and they certainly do not cut a single benefit for Medicare or Medicaid -- Obama is simply lying."

McCain also returned to the campaign trail Friday, traveling to Florida -- a state the Republicans won in the last two presidential elections.

Watch how Obama has opened up a lead in the polls »

A fired-up McCain told a crowd in Miami that while Americans are facing hard times and the nation's financial system is in crisis, "the next president won't have time to get used to the office."

"He won't have the luxury of studying up on the issues before he acts. He will have to act immediately. And to do that, he will need experience, courage, judgment and a bold plan of action to take this country in a new direction," McCain said, referring to Obama.

Over the weekend, McCain will head to North Carolina, another state that Republicans have counted on in recent elections but is now considered a tossup.

Watch how North Carolina has become a battleground state »

Meanwhile, Palin, McCain's running mate, lashed out Friday at Obama's connection to the ACORN community activist group, which is under fire for alleged voter registration fraud.

The group -- the Association of Community Organizations for Reform Now -- faces allegations of filing fraudulent voter registrations in Nevada and faces investigations in other states.

Palin, campaigning in the battleground state of Ohio, told a crowd in West Chester that Obama "won't tell you the full truth ... on his connections to ACORN ... under investigation for rampant voter fraud."

The FBI confirmed Tuesday that it is investigating ACORN's registration efforts. Palin accused the group of "rampant voter fraud," although technically it is being accused of voter registration fraud.

"In this election, especially here in Ohio, you're going to be asked to choose between a candidate who will not disavow a group committing voter fraud and a leader who will not tolerate it," Palin said.

Brian Mellor, an ACORN attorney in Boston, Massachusetts, said the group has its own quality control process and has fired workers in the past -- including workers in Gary, Indiana. But he said allegations that his organization committed fraud is a government attempt to keep people disenfranchised.

"We believe their purpose is to attack ACORN and suppress votes," he said.

Palin said her campaign is calling on Obama, the Democratic presidential nominee, to release communications his campaign had with the group. Read more about Obama and ACORN

"[We] don't want to turn the Buckeye State into the ACORN state," she said to loud cheers.

Obama campaign spokesman Tommy Vietor responded in a statement Friday, saying: "We have not worked with ACORN at all in the general election. Rather than make these false, desperate attacks, the McCain-Palin campaign should release an economic plan that actually helps the middle class instead of giving billions in tax cuts to big corporations."