LONDON, England (CNN) -- There's no doubt about it. The European media has given Sarah Palin a hard time. 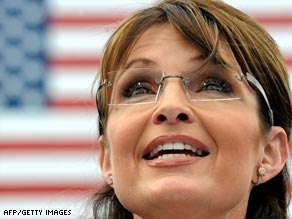 One European newspaper called the idea of a Palin presidency a "half-baked Alaskan nightmare."

Things started quite well, with the curiosity factor. To many Europeans there is something exotic about snowy Alaska. Viewers and readers were intrigued by the shots of the outdoorswoman with her eyes squinting fixed along a gun barrel, the thought of a vice president who had once been a beauty queen.

Columnists were approving that here, for once, was a politician in the higher reaches who probably actually knew the price of a loaf and a pint of milk. Women writers in particular responded warmly to her joke about the difference between a pitbull and a hockey mom --"Lipstick."

But soon the carping began, and it was not confined to what U.S. rightists like to dismiss as the "liberal media elite."

We were, the Irish Times warned, "just a heartbeat away from the biggest half-baked Alaskan nightmare." Britain's Financial Times said his selection of vice president raised serious questions about John McCain's judgment and added: "The Palin appointment is yet more proof of the way that abortion still dominates American politics."

Prominence was given to an onslaught on Palin's environmental and animal rights record by veteran ex-film star Brigitte Bardot. Spain's left wing El Pais described Palin as "a figure who comes from the America that is farthest removed from and incomprehensible to the European spectator."

Since then the scorn has been constant, the jokes unrelenting, the YouTube exposure devastating. But let us dispel one bit of nonsense from the start. It is nothing to do with Sarah Palin being of the feminine gender. Sound Off: Is it fair for Europeans to criticize Sarah Palin?

Europeans have been astonished that America has never had a woman president. After all we in Britain elected the redoubtable Margaret Thatcher three times as prime minister. Norway did the same with Gro Harlem Brundtland. Germany has a female chancellor, Angela Merkel, even if she does tend to underline the remark I once heard from a British Ambassador: "A German joke is no laughing matter."

Nicolas Sarkozy's socialist challenger for the French presidency was the elegant Segolene Royal.

When Sarah Palin first became McCain's running mate there were even headlines in some British media suggesting that America had found its own Margaret Thatcher.

That certainly was overdoing it. So much so that after 20 years close up reporting on the original I can't resist the temptation to paraphrase Lloyd Bentsen's comment when Dan Quayle unwisely compared himself to John F. Kennedy. "I've interviewed Margaret Thatcher, Governor Palin, and I can tell you that you are no Margaret Thatcher."

No, the problem for Sarah Palin in terms of her acceptance in Europe has been the deep wave of Obamamania that had already swept through the European media before her appointment, the self-inflicted wounds of her early media appearances and the apparent box-ticking cynicism of her choice.

That was summed up for some by the appearance of those women at McCain rallies wearing T-shirts emblazoned "Small Town Gun-Totin Christians for McCain."

For Europeans, who were alienated during George W. Bush's first four years by a president who showed little interest in their continent and patently cared nothing for the opinions of its leaders, the turning point probably came with the appearance on the Katie Couric show when Palin confessed to not having had a passport until 2006.

Europeans are appalled at the thought that someone who wants to be vice president of the most powerful nation on earth had so little interest in the rest of a world which is so vitally affected by the decisions of the man, or woman, in the White House. iReport: Why are the 2008 U.S. Elections important to you and your home country?

And they are not much impressed by explanations that her parents did not have the money to send her on a fact-finding tour of the world as a student. Anybody with the money to own an SUV, hunt moose and drive a snowmobile has the money to travel.

It was the American Mark Twain who reminded us all that "travel is fatal to prejudice, bigotry and narrow-mindedness." If Sarah Palin wanted to be loved in Europe she should have got about a bit.