Analysis: Why is Elizabeth Dole vulnerable?

Stuart Rothenberg, who has served as a political analyst for CNN and CBS News, is editor and publisher of The Rothenberg Political Report, a non-partisan political newsletter. Nathan Gonzales is the publication's political editor. 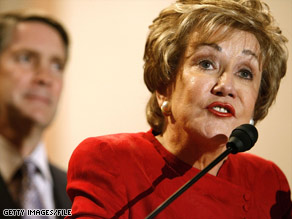 North Carolina's Elizabeth Dole was once regarded as a lock for re-election, but now could lose her seat.

WASHINGTON (CNN) -- Two years ago, as the 2007-2008 election cycle was beginning, one female Republican senator up for re-election looked to be in serious danger: Maine's Susan Collins.

But with just three weeks left until Election Day, the moderate Collins now appears to be one of the few embattled Republican senators who could survive the forthcoming Democratic wave.

On the other hand, North Carolina's Elizabeth Dole, once regarded as a lock for re-election, looks as if she is about to fall at the hands of Democratic challenger Kay Hagan.

How did Dole become more endangered than Collins?

First, Collins' campaign understood from the beginning that her opponent, 1st District Democratic Congressman Tom Allen, would be a formidable foe. Allen, a former mayor of Portland, already represents half of the state, and he has the kind of earnest, low-key style that appeals to many Maine voters.

Second, Collins understood that she'd get no help from the top of the ticket this year, so she had to raise money and get her message out early. Most neutral observers have expected the eventual Democratic nominee for president to carry Maine this year, since Al Gore carried the state by 5 percentage points in 2000 and John Kerry won it by 9 percentage points four years ago.

Third, for whatever reason, Collins has, over the 12 years that she has represented the state in the Senate, developed considerable affection and respect from Maine voters, who see her as independent, hard-working and down to earth. It has been that bond with state voters that has allowed her to weather the current storm that is overwhelming other Republican incumbents.

Dole, on the other hand, seemed not to appreciate the threat she faced. Hagan, after all, was not the initially-preferred candidate of the Democratic Senatorial Campaign Committee, and the Democratic state senator from Greensboro had first ruled out a bid against Dole before eventually changing her mind.

Dole also apparently had trouble accepting that she was vulnerable. Her early poll numbers were strong, after all. But the DSCC spent heavily to attack Dole early, and they succeeded in softening her up. They also hit her on two good issues: her effectiveness (or lack of it) in Washington and the little time that she has spent in the state over the past few years.

Finally, Democratic presidential nominee Barack Obama is running better in the Tarheel state than most expected, so Dole isn't getting any kind of bump from the presidential race. Voters seem more interested in voting for change than for the more conservative candidate in the presidential and Senate races, and that has made Elizabeth Dole a seriously endangered incumbent.

Collins can't yet take her re-election for granted, and Hagan's victory is not yet certain. But Susan Collins appreciated her vulnerability early on and took steps to strengthen her chances for re-election, while Dole was slower to react and was weaker in her positioning than she initially believed.