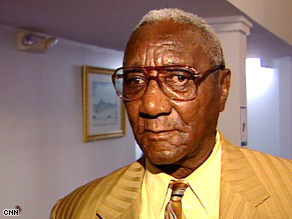 Ollie James, 84, says he knows Obama is going to win, because he believes "God answers prayers."

The "he" James is referring to is Democratic presidential nominee Barack Obama. "From where I came from, with the segregation and all the hatred, I never thought an African-American would get this far in the United States. Really."

But three weeks until Election Day, James and many other African-Americans are now optimistic they will be part of history.

"I am kind of anticipating it will happen," said Raymond Henderson, a soft-spoken African-American man in his 60s. "But no, I did not expect it to happen in my lifetime."

It is the flip side of the "race debate" in Campaign 2008: While the Obama campaign and its Democratic allies are aggressively working to address the concerns of blue-collar and rural whites who are reluctant to support a black candidate for president, there is an enthusiasm in the African-American community that Democrats believe could lead to dramatically increased turnout and perhaps tip the scales in several key battlegrounds, Missouri among them.

African-Americans cast 10 percent of the ballots for president in 2000 and about 12 percent in 2004. Obama aides believe if that percentage increased just modestly in 2008, it could make the difference in at least a half-dozen states: Missouri, Ohio, North Carolina, Florida, Pennsylvania and Virginia.

Wisconsin and Nevada are additional battlegrounds where Obama organizers are counting on an increase in African-American turnout in their Election Day game plan.

To reach its goal, the campaign is counting on a combination of newly registered African-Americans and aggressive outreach to tens of thousands black voters who are registered to vote but have stayed home in past elections.

See why African-Americans are finding hope in Obama »

At Leonard Missionary Baptist, the Rev. Steven Thompson is careful not to preach from the pulpit: He exhorts his congregants to vote but does not preach in favor of or against any specific candidate.

Still, a visit to his services found an overwhelmingly pro-Obama crowd, and Thompson says the enthusiasm level about this election is unprecedented in his two decades as the inner-city church's pastor.

"The energy comes from the fact that it is historical, and we've got a lot of first-time voters and many like myself who have been through a few, and it still has that pumped up energy in it," Thompson said.

Increased African-American turnout is all the more important because of Obama's tougher challenge in more conservative, rural areas. In the Missouri Ozarks, a roadside billboard shows a cartoon of Obama with a turban, his middle name "Hussein" in bold red letters.

"Hmmmm," Thompson said when shown a photograph of the billboard, keeping his trademark calm.

"If I spent my time getting angry about the things people do, then I can't do what I effectively do here," Thompson said as he gestured toward the pulpit. "Those people who do stuff like that, the only thing I can say is, we pray for them."

Fredrick Lemon II says that for months, he doubted that Obama could win, but now he believes he can. Still, Lemon took time after services to compliment Republican nominee John McCain for trying to calm angry supporters at recent rallies, including a woman last week who incorrectly said she was worried about an Obama presidency because he is Arab.

"It has gotten a little nasty," Lemon said. "But I think that John McCain really showed some integrity and some character when he was at the last town hall meeting and some people said some disparaging remarks and he corrected them. And that just shows that he does have integrity."

All About Barack Obama • Missouri