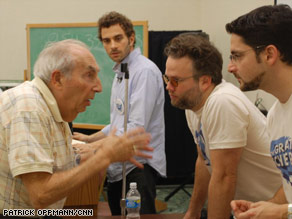 A senior discusses Sen. Barack Obama with organizers of the Great Schelp in Tamarac, Florida, on Sunday.

A Yiddish word meaning to pull, yank or tug, schlep is a good way of describing what it took for Mike Bender to persuade his grandparents to vote for Sen. Barack Obama for president.

Bender's grandparents, Kenny and Selma Furst, 90 and 87 years old, should have been an easy sell to support the Democratic nominee for president.

Like many of the estimated 650,000 Jews living in Florida, the Fursts are lifelong, passionate Democrats and a crucial vote for any Democratic candidate hoping to win the battleground state.

But when Bender -- who is not affiliated with Obama's campaign but supports him -- brought up the idea of voting for Obama over Thanksgiving dinner last year, he was met with an uncharacteristic silence.

"Their reaction was, as they said, 'I'm a little meschugah,' " Bender said, adding that the expression meant "crazy."

For Selma Furst, voting for an African-American for president seemed unthinkable.

"I grew up with Jewish people and Italian people, but I never lived in a neighborhood that was black," she said. "Somebody said to me, 'What do you object to about him?' I said, well, truthfully, our colors are different."

Overcoming the prejudices of his grandparents' generation would be difficult, Bender realized. But he was not going to be alone.

But Wallach said it wasn't just a question of race. He cited a months-long misleading Internet campaign that aimed to convince voters that Obama is a Muslim or that he would reverse the United States' policy of supporting Israel. Obama is Christian and says he backs a strong U.S.-Israel relationship.

"The older demographic particularly were being hit with tons and tons of Obama smear e-mails," Wallach said. "If you really want to talk to them in a way that will bring them over to the Obama side, you want to do it one to one, ideally with people they love. And grandparents love no one more than their grandkids."

And so the Great Schlep was born. The idea was that young, Jewish Democrats would flood Florida and convince their elders that voting for Obama was OK.

To get the word out about the Great Schlep, Wallach and his colleagues turned to comedian Sarah Silverman. Silverman makes the case for Obama in a Web video in which she attempts to show similarities -- some tenuous -- between an African-American man and an older Jewish woman. She raves about the Democratic candidate's brisket and points out that Barack comes from the Hebrew word for "lightning."

The video ends with Silverman advising Obama supporters to let their grandparents know that should they fail to vote Democratic in the presidential election in November, maybe they shouldn't expect many more family visits.

The Silverman video quickly became a Web sensation, garnering about 2 million hits in the two weeks since it was posted on thegreatschlep.com, organizers said. Thousands of people pledged to call their relatives in Florida and more than 100 people volunteered to pay their own way to travel to the Sunshine State to campaign for Obama among Jewish voters, Wallach said.

Bender saw the Silverman video on YouTube in Los Angeles, California, where he works as a writer. Despite the humor of Silverman's call to schlep, the video's message resonated with Bender because of the difficulty he faced convincing his own grandparents.

"I thought it was brilliant," Bender said.

He decided to go to Florida and try one more time.

When Bender recently returned to his grandparents' retirement community in Tamarac, Florida, near Fort Lauderdale, he was greeted with several surprises. Months of telephone conversations and his trip had paid off: His grandparents told him shortly after he arrived that they were going to support Obama.

The next surprise was that his schlep had generated interest around their retirement community. A lot of interest. So many other seniors wanted to hear about Obama that the venue for a meeting on the subject had to be changed from the Furst's living room to a ballroom in the community's clubhouse.

An hour before Bender started to make his case about Obama on Sunday, groups of senior citizens were staking out space in the ballroom. Soon there were more than 100 people and no more chairs.

Sporting an Obama T-shirt with Hebrew writing on it, retiree Morty Brill said, "The economy, the war, you think you can trust Republicans to fix them?"

If there were any people in the room with reservations about Barack Obama, they kept those doubts to themselves.

However, Bender felt the need to drive the point further. If Obama was elected, he said, then Bender would not worry so much about politics and "would have more time to find a nice Jewish girl to marry."

Whether Mike Bender's schlep really changed any minds is anyone's guess, but the applause from the crowd was deafening.