WASHINGTON (CNN) -- Sen. John McCain called a statement by a Georgia congressman Saturday, which compared the feeling at recent Republican rallies to those of segregationist George Wallace, "a brazen and baseless attack." 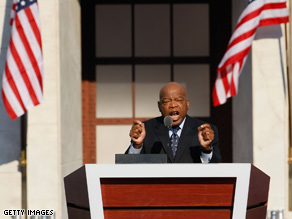 Rep. John Lewis, D-Georgia, who has been praised by McCain in the past, issued his statement after several days of headline-grabbing anger aimed at Democratic nominee Barack Obama from some attendees at campaign rallies of McCain and running mate Gov. Sarah Palin.

"George Wallace never threw a bomb. He never fired a gun, but he created the climate and the conditions that encouraged vicious attacks against innocent Americans who were simply trying to exercise their constitutional rights. Because of this atmosphere of hate, four little girls were killed on Sunday morning when a church was bombed in Birmingham, Alabama," wrote the Democrat.

McCain has written about Lewis, praising his actions in Selma, Alabama, during the civil rights movement. The Republican nominee even said during a summer faith forum that Lewis was one of three men he would turn to for counsel as president.

But the Arizona senator blasted Lewis' remarks, and called on Obama to repudiate them.

"Congressman John Lewis' comments represent a character attack against Gov. Sarah Palin and me that is shocking and beyond the pale," he said in a Saturday afternoon statement released by his campaign.

"The notion that legitimate criticism of Sen. Obama's record and positions could be compared to Gov. George Wallace, his segregationist policies and the violence he provoked is unacceptable and has no place in this campaign. I am saddened that John Lewis, a man I've always admired, would make such a brazen and baseless attack on my character and the character of the thousands of hardworking Americans who come to our events to cheer for the kind of reform that will put America on the right track.

"I call on Sen. Obama to immediately and personally repudiate these outrageous and divisive comments that are so clearly designed to shut down debate 24 days before the election. Our country must return to the important debate about the path forward for America."

"Sen. Obama does not believe that John McCain or his policy criticism is in any way comparable to George Wallace or his segregationist policies," Burton said. "But John Lewis was right to condemn some of the hateful rhetoric that John McCain himself personally rebuked just last night, as well as the baseless and profoundly irresponsible charges from his own running mate that the Democratic nominee for president of the United States 'pals around with terrorists.' "

Later Saturday, Lewis issued a statement saying a careful review of his remarks "would reveal that I did not compare Sen. John McCain or Gov. Sarah Palin to George Wallace."

"My statement was a reminder to all Americans that toxic language can lead to destructive behavior," Lewis said. "I am glad that Sen. McCain has taken some steps to correct divisive speech at his rallies. I believe we need to return to civil discourse in this election about the pressing economic issues that are affecting our nation."