Obama in position to take Virginia from GOP

WASHINGTON (CNN) -- Virginia hasn't backed a Democrat for president in 44 years, but economic concerns and changing demographics are giving Sen. Barack Obama a chance to steal the once reliably red state from Republicans. 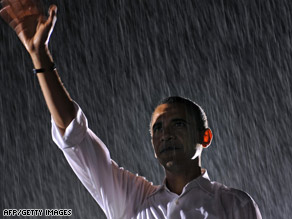 Sen. Barack Obama waves as rain falls on a rally in Fredericksburg, Virginia, in late September.

A Virginia Commonwealth University poll taken May 12-18 had McCain leading 47 percent to 39 percent.

But as the financial crisis has shaken voters' confidence in the economy, Obama has begun to open a lead in the state, as he has done in other battleground states.

The latest CNN poll of polls has Obama leading McCain 49 percent to 45 percent. A CNN/TIME/Opinion Research Corporation poll conducted September 28-30 shows Obama with an even bigger lead over McCain, 53 percent to 44 percent. The CNN poll's margin of error was plus or minus 4 percentage points.

Polls show that voters have more confidence in Obama to handle the economic crisis than they do in McCain, and are more likely to blame Republicans for the recent turmoil than Democrats.

Beside an advantage on the economy, Obama is also benefiting from a demographic shift that has reshaped Virginia politics.

For the last 10 presidential elections, Republicans have been able to bank on Virginia delivering its 13 electoral votes to the GOP. President Bush won Virginia by 8 percentage points in both 2000 and 2004, and President Bill Clinton was never able to capture the state when he ran in 1992 and 1996.

But the explosive growth of Northern Virginia in the last decade has changed the state's electorate. Drawn by government jobs in nearby Washington and high-tech jobs in the Dulles corridor, the growing population in Northern Virginia is more liberal than the mostly rural southern portion of the state, which has remained reliably Republican.

In 2000, Bush carried Northern Virginia 49 percent to 47 percent, but in 2004, Sen. John Kerry, the Democratic presidential nominee, carried the area 51 percent to 48 percent.

Virginia "is not as red as people think," said Doc Thompson, a conservative talk show host for WRVA radio. "A third of the population in Northern Virginia is pretty liberal. A lot of people are buying into [Obama's] notion of change."

Virginia Democrats have been able to exploit the changes in the electorate into statewide electoral success after years in which the Republicans had a virtual lock on the state.

In fact, Virginia Republicans have not won a statewide race since Mark Warner, a former mobile phone company executive, captured the governorship for the Democrats in 2001 by emphasizing economic growth.

Democrat Tim Kaine, who was Warner's lieutenant governor, succeeded Warner in 2005. And in what may have been the most surprising result of the 2006 election cycle, Democrat Jim Webb defeated the incumbent Republican George Allen in the race for one of Virginia's seats in the U.S. Senate.

The extremely popular Warner is almost certain to win this year's race against another former governor, Republican Jim Gilmore, to replace Virginia's long-standing Republican senator, John Warner, who is retiring. (The two Warners are not related, and John Warner was unopposed in 2002.)

A Washington Post-ABC News poll conducted in late September found Warner leading Gilmore by 30 points, and Warner's victory would give Democrats control of both of Virginia's seats in the U.S. Senate for the first time since 1970.

While conservatives may be demoralized by Gilmore's poor showing, McCain may also face eroding support from Virginia conservatives for his recent proposals for the government to become heavily involved in the U.S. economy, said Thompson, the radio talk show host.

During Tuesday night's presidential debate, McCain suggested that the government directly buy up to $300 billion in home mortgages to help homeowners facing foreclosure.

Thompson said that proposal, along with his support for a $700 billion bailout package to help Wall Street firms that McCain voted for last week, are two signs that McCain is breaking from the free-market principles that Virginia conservatives support and not stopping "the march toward socialism" that has begun since the economic crisis started.

"They missed a real opportunity, certainly, in Virginia with my listeners who say they want someone who is fiscally conservative," said Thompson, who added that he's considering voting for a third-party candidate. "They could have come out and said, 'no more spending.' "