NASHVILLE, Tennessee (CNN) -- A new national poll suggests Barack Obama is widening his lead over John McCain in the race for the White House. 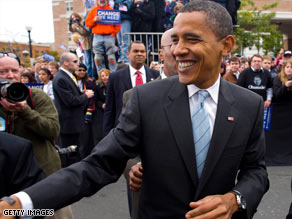 The CNN/Opinion Research Corporation poll out Monday afternoon suggests that the country's financial crisis, record low approval ratings for President Bush and a drop in the public's perception of McCain's running mate could be contributing to Obama's gains.

Fifty-three percent of likely voters questioned in the poll say they are backing Obama for president, with 45 percent supporting McCain.

That 8-point lead is double the 4-point lead Obama held in the last CNN/Opinion Research Corporation poll, taken in mid-September. Watch why the economy is hurting McCain

President Bush may be part of the reason why Obama's making gains. Only 24 percent of those polled approve of Bush's job as president, an all-time low for a CNN survey. See the latest polling

"Bush has now tied Richard Nixon's worst rating ever, taken in a poll just before he resigned in 1974, and is only 2 points higher than the worst presidential approval rating in history, Harry Truman's 22 percent mark in February 1952," says CNN Polling Director Keating Holland.

"A majority of Americans now believe that Sarah Palin would be unqualified to serve as president if it became necessary, and her unfavorable rating has doubled," Holland said.

Another hurdle for the Arizona senator is expectations. Six in 10 questioned in the poll predict that Obama will win the November election. iReport.com: Are you in a battleground state?

The poll was conducted Friday through Sunday, just after President Bush signed the $700 billion federal bailout into law. By a 53 percent to 46 percent margin, Americans oppose the bill.

"One in five might have supported a different bill, but one in three believe that the government should have stayed out of the crisis completely and let the markets attempt to recover on their own.

"A majority think that the bailout package will not prevent the economy from going into a deep and prolonged recession -- but they turn thumbs-down to another bailout package if this one does not work. Only one in five would support more assistance beyond Friday's $700 billion package," Holland said.

The CNN/Opinion Research Corporation poll was conducted by telephone on October 3-5. The survey questioned 1,006 people. The survey's sampling error is plus or minus 3.5 percentage points.

The Poll of Polls does not have a sampling error.