WASHINGTON (CNN) -- Following the passage of the economic bailout bill Friday, House Speaker Nancy Pelosi said congressional hearings are planned to find the causes of the crisis and to determine "where we go from here." 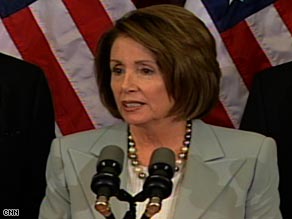 "We were dealt a bad hand; we made the most of it," Speaker of the House Nancy Pelosi said Friday.

She said Congress will shine a new "light of scrutiny and accountability" on the nation's financial system to try to prevent a replay of the problems that plunged the nation into an financial crisis.

"We want to take our country in a new direction for the middle class," Pelosi said.

Frank told reporters Friday that starting in January, Congress will "have a major role."

"We have to rewrite housing in America. ... It would be highly irresponsible if we were to stop here," he said. "Now we have to perform more serious reform."

On Friday, the House passed the $700 billion measure by 92 votes -- 263 to 171 -- with the plan picking up support on both sides of the aisle after going down to defeat in the House on Monday. Interactive: Read the House roll call vote (PDF)

Because tax bills must originate in the House, the Senate attached the rescue plan to a bill that deals with renewable energy tax incentives. This allowed the Senate to vote before the House to approve a bailout bill.

"These steps represent decisive action to ease the credit crunch that is now threatening our economy," Bush said of the provisions of the bill.

Ben Bernanke, chairman of the Federal Reserve, reacted to the bill's passage, saying in a statement: "The legislation is a critical step toward stabilizing our financial markets and ensuring an uninterrupted flow of credit to households and businesses."

Treasury Secretary Henry Paulson said the bill would meet the varied needs of financial institutions of all sizes.

"Each institution has its own unique benefits, and their collective strength makes our financial system more resilient, and more innovative. The challenges our institutions face are just as varied -- from holding illiquid mortgage-backed securities, to illiquid whole loans, to raising needed capital, to simply facing a crisis of confidence," Paulson said in a statement Friday.

Rep. Joe Knollenberg, R-Michigan, said he changed his vote to "yes" Friday when calls to his office changed after Monday's rejection of the plan in the House.

"A lot of people change their minds [about the bill] after seeing heartbreak in the streets," he said.

At least 21 House members said Friday they had switched positions.

Among the 21 converts was Rep. Jesse Jackson Jr., D-Illinois, said his chief of staff, Kenneth Edmonds.

Edmonds said Jackson was changing his vote because "he received assurances from [Sen. Barack Obama] that, if elected, his administration will aggressively use authority in the bill to prevent foreclosures and stabilize the housing market."

Rep. Howard Coble, R-North Carolina, said he planned to switch his vote because constituents began urging him to do so. He said the people he represents initially urged him to oppose the plan.

"By having waited, I think we did improve the bill," he said. "Inaction is not an option.'

Other Republicans who said they planned to change their votes to support the bill included Rep. Ileana Ros-Lehtinen of Florida, Rep. John Sullivan of Oklahoma, Rep. Jim Ramstad of Minnesota, Rep. John Shadegg of Arizona and Rep. Sue Myrick of North Carolina.

Rep. Zach Wamp, R-Tennessee, said he planned to change his vote because "we're out of choices. Our backs are up against the wall."

Rep. John Boehner of Ohio, the House Republican leader, said the Senate improved the bill by adding "sweeteners" and passing it by a wide bipartisan margin Wednesday.

View details of some of the incentives »

"Is it perfect? No. But it's clearly better than it was a week ago," he said.

First, he said, constituent calls to House Republicans have evened out among those urging their representatives to support the bill and those urging them to oppose it. In addition, the Securities and Exchange Commission has unveiled plans for new accounting standards.

And the Senate added provisions that please many House Republicans, such as increasing the cap for Federal Deposit Insurance Corporation coverage from $100,000 to $250,000.

"We're optimistic as we go to the floor today," Blunt said. "We feel good about the direction we're headed."

Another factor influencing Republicans, House GOP leaders said, was news that the state governments of California and Florida have reported having trouble accessing credit.

"I am hopeful that there will be bipartisan, majority support for this bill that is critical to stabilizing our nation's economy for all working Americans," House Majority Leader Steny Hoyer, D-Maryland, said in a statement late Thursday.

On Wednesday, Hoyer said he would only bring the bill to the floor if, after talking with Republican leaders, he found "bipartisan majority support" for it.

Watch one congressman who says he won't support bailout »

The modified bailout package included the core measures the House rejected -- a plan that would allow the treasury secretary to buy up to $700 billion in bad mortgage-related securities and other bad assets that are undermining credit markets worldwide -- as well as a mix of other measures that previously passed in the Senate.

The bill also includes a "mental-health parity" provision, which would require health insurance companies to cover mental illness at parity with physical illness.

Watch what "pork" was added to bill »