Greene: After debate civility, back to the low road?

Editor's note: Award-winning writer Bob Greene is riding CNN's Election Express across the country in the final weeks before the election to tell stories about how the issues affect Americans. 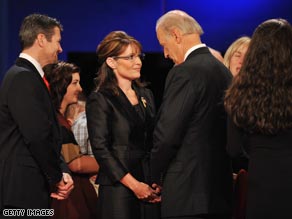 ABOARD THE CNN ELECTION EXPRESS (CNN) -- On the surface, at least, the civility at Thursday's vice presidential debate started the moment Joe Biden and Sarah Palin warmly greeted each other on the stage at the outset.

Policy differences aside, here in St. Louis, Missouri, all feelings were good feelings, if you believed what you were seeing.

And the question becomes, as the presidential campaign moves on today:

Does this signal an end to the escalating campaign nastiness the country has observed in recent weeks? Will the attack ads stop, will the ruthless thrusts by the opposing organizations come to an end?

You already know the answer. If past is prologue, the meanest days on the path to the presidency lie ahead.

But on our journey through the United States, we have stopped many times to ask the men and women we meet:

If you had a "delete" button available to you, and could push it and instantly get rid of one aspect of the campaign, what would it be?

But the most frequent answer -- the one we began to anticipate even as we asked the question -- was some version of:

It would be so nice if the campaigns would get rid of the dirty stuff; would do away with the name-calling and ugly whispers.

"The attack ads," said Barbara Davis, of Southaven, Mississippi. "All those negative ads where the candidates go after each other. If I could push a button and make all of that disappear, I would. It would be so much better if they would just talk to us about the issues."

The history of campaigns tells us the high road can be a lonely place; that is not where victory resides. Or so the political professionals appear to believe.

But the voters say they don't accept this notion.

"The gossip is what I can't stand," said April Leek, 33, with whom we spoke in Guernsey County, Ohio. "I don't need to hear about the personal business in the candidates' lives, or in the lives of their families. These are government officials, not movie stars, but we can't seem to tell the difference anymore. I think other countries watch how we conduct our presidential campaigns, and they must laugh at us."

Time after time, before we could even finish asking the question about the "delete" button, people gave us their almost unvarying answers.

"The dirt," said Tom Murphy, 67, of Long Island, New York. "Get rid of the dirt. Talk to us about something of substance. We've had enough of this nonsense. Treat the voters with a little respect."

The campaigns must hear the same things we do -- and reject it.

"I can't stand the mudslinging," said Kelly Britland, 31, of Franklin County, Pennsylvania. "All those commercials are really saying, in different words, is: 'This guy's bad.' It's like talking trash to someone. It's not saying why people should vote for the candidate who's paying for the ad. It's just calling the other candidate names."

Why does she think the low road remains so congested?

"On some level, it must work," she said. "The commercials must change people's minds about the candidates, or the campaigns wouldn't always spend money on them."

Things truly did seem stylistically pleasant on the stage at Washington University in St. Louis Thursday night. The manner in which Biden and Palin treated each other, at least in ways a world watching on television could see, gave hope that the collegial tone might extend all the way to election night November 4.

"Don't blame the candidates for it," said Brad Webb, 65, of Anderson, South Carolina. "And don't blame the media. Blame us. The public."

Blame the public? Blame the voters? Why?

"Because candidates wouldn't give this to us if they thought we really didn't want to see it," he said. "It's our fault for watching. You know the way people stop on the highway to stare at a bad accident, even though they feel bad for doing it? That's us, with the negative campaigning. We always stop to look. If we didn't, they wouldn't keep giving us something to look at."