Obama, McCain, Biden all to vote on bailout bill

NEW: Obama: "If there's a vote tomorrow night I will be there"
McCain: "We are in the greatest financial crisis of our lifetimes"
McCain proposes using Treasury to back banks, buy mortgages
McCain, Obama want FDIC limit raised from $100,000 to $250,000 per account

(CNN) -- Sens. John McCain, Barack Obama and Joe Biden will be in Washington on Wednesday to vote on the $700 billion bank rescue plan. The vote, scheduled to happen at sundown Wednesday evening, comes two days after the House failed to pass the controversial economic recovery plan. 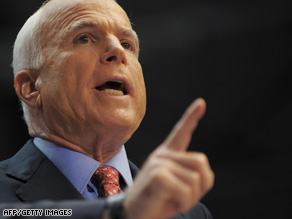 "If there's a vote tomorrow night, I will be there," Obama told CNN Tuesday night.

The bill adds provisions -- include raising the FDIC insurance cap from $100,000 to $250,000 -- and will be attached to an existing revenue bill that the House also rejected Monday, according to several Democratic leadership aides.

He said he hoped that the changes made to the bailout plan would be approved by senators on both sides of the aisle. "I believe that this legislative package will ensure that the needs of Main Street are not forgotten," said Reid.

McCain spoke earlier Tuesday at an economic roundtable in Des Moines, Iowa. "We didn't do a good enough job. We'll go at it. I'm glad to stay at it. That's what my job is as an American, not as a candidate for president," he said. "But if I think I can do some good, I'll do it. I may fail a first or second or third time, but we have to get this job done for America."

McCain said now is the time for bipartisanship in order to push through the $700 billion proposal, which failed in the House of Representatives Monday.

"To state the obvious, we are in the greatest financial crisis of our lifetimes. Congressional inaction has put every American and the entire economy at the gravest risk. Yesterday, the country and the world looked to Washington for leadership, and Congress once again came up empty-handed," he said.

"Bipartisanship is a tough thing; never more so when you're trying to take necessary but publicly unpopular action. But inaction is not an option."

Obama, speaking at a rally in Reno, Nevada, on Tuesday, issued a tough message to fellow lawmakers.

"To the Democrats and Republicans who opposed this plan yesterday, I say step up to the plate and do what's right for this country," he said. "And to all Americans, I say this: If and when I am president of the United States, this rescue plan will not be the end of what we do to strengthen this economy, it will only be the beginning.

Earlier Tuesday on CNN's American Morning, McCain said the rescue plan failed because people don't think it will do anything for them.

"We haven't convinced people that this is a rescue effort not just for Wall Street but for Main Street America," McCain said. "... We didn't do a good enough job."

Watch McCain lay out his proposal »

Obama made the same proposal on Tuesday morning as a way to persuade lawmakers who voted against the proposed $700 billion bailout to change their minds.

McCain, who briefly suspended his campaign last week to focus on the financial crisis, did not say whether he would take that action again.

"I will do whatever is necessary," he told CNN.

McCain said he spoke to President Bush on Tuesday morning to offer his recommendations for a short-term plan "to restore our economy," including using $250 billion of the Treasury Department's exchange stability fund to "shore up our institutions."

McCain said the Treasury Department should also use its power to purchase up to $1 trillion of mortgages.

"Both calls [from McCain and Obama] were very constructive, and the president appreciated hearing from them," White House spokesman Tony Fratto said. "The senators offered ideas and reaffirmed what they have said publicly -- that this is a critical issue that needs to be addressed.

"We're not going to comment on specific ideas, but we appreciate hearing them and will continue to work with congressional leaders on ideas that will help the economy," Fratto said.

Obama blasted Congress Monday for not passing the rescue package, while McCain's campaign accused Obama and Democrats of putting "politics ahead of country."

The U.S. House rejected the plan Monday, putting a roadblock in front of what would be the largest government intervention in the financial markets since the Great Depression.

The bill failed by a vote of 228-205, with 140 Democrats and 65 Republicans voting in favor and 95 Democrats joining 133 Republicans against.

"This is a moment of national crisis, and today's inaction in Congress as well as the angry and hyper-partisan statement released by the McCain campaign are exactly why the American people are disgusted with Washington," the Obama-Biden campaign said in a statement released shortly after the vote.

The statement went on to say that every American "should be outraged that an era of greed and irresponsibility on Wall Street and Washington has led us to this point."

Watch more on the vote »

Also after the vote, McCain touted his role in last week's negotiations on the bailout bill.

"I laid out principles" including "responsible oversight, transparency and a cap on so-called golden parachutes, those big bonuses Wall Street CEOs would receive despite their involvement in the economic crisis," he said. "I worked hard to play a constructive role."

The economy has dominated the campaign trail this month, and both candidates have been trying to convince voters that they will do a better job of getting the financial crisis under control. iReport.com: Share your stories from the campaign trail

Meanwhile, as McCain and Obama continue campaigning this week, their running mates are focused on their upcoming debate. Gov. Sarah Palin and Sen. Joe Biden face off Thursday in St. Louis, Missouri, in the only vice presidential debate of the election season.

After McCain's rally, Palin headed to McCain's ranch near Sedona, Arizona, for what a top aide calls "debate camp."

Biden was preparing for the debate in Delaware on Monday.

The Senate's vote on the bill is scheduled for after sundown, in observance of Rosh Hashana, the Jewish holiday.

All About Sarah Palin • Joseph Biden