Straight from the House's mouth: Why the bailout bill failed

(CNN) -- President Bush, Treasury Secretary Henry Paulson and the leadership of both parties pushed for a $700 billion financial bailout plan intended to shore up the nation's lenders. Such consensus is rare these days in American politics, but the bill still failed in the House on Monday afternoon. 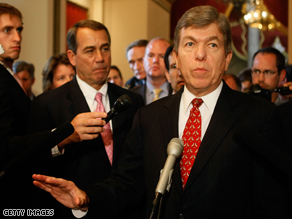 The Republican House leadership addresses the media after the bailout vote Monday afternoon.

The reasons why became a bit more clear Tuesday.

During impassioned speeches on the House floor Monday and a media blitz Tuesday, Democratic and Republican House members who voted against the plan argued that, despite the staggering price, the bill did not provide adequate protection for the average taxpayer and that it gave too much power to the Bush administration with little oversight.

"I want Wall Street to pay to bail Wall Street out rather than putting the burden on people who had nothing to do with this," said Rep. Lloyd Doggett, a Democrat from Texas.

He added: "My vote was a vote to say protect the taxpayer first [and] don't give President Bush unlimited discretion. We know where that's taken us before on other matters."

Rep. Marsha Blackburn, a Republican from Tennessee, who worked on the deal during the weekend but ended up voting against it, said the bill asked too much of taxpayers.

"You're talking about $700 billion, a $250 billion blank check at this point for [Paulson]," she said. "But then, on top of that, when you read the bill, there was an increase in the federal debt limit to $11.3 trillion. Now, that is all taxpayer cost."

Republican Rep. Paul Broun of Georgia described the bill as "a huge cow patty with a piece of marshmallow stuck in the middle. I'm not going to eat that cow patty."

Some representatives said the package was too significant a bill to consider in so little time. "We didn't get into this mess in 72 hours and we're sure not going to get out of it in 72 hours," said Rep. Marilyn Musgrave, a Colorado Republican who voted against the bill.

New York's Democratic Rep. Charles Rangel, who voted for the bill, said, "The people that have been responsible for the reckless lack of regulation of the industry have come to us at the 11th hour with a gun to our heads."

Although opposition to the bill may have been bipartisan, there were some fundamental differences in the reasons Democrats and Republicans gave for voting against it.

Some Democratic representatives said the rescue package could have and should have done more.

"I really do think there could have been a better deal," said Rep. Sheila Jackson-Lee, a Democrat from Texas. "There was no mark in the bill for specifically helping Americans -- Mr. and Mrs. Main Street -- get out of their mortgage foreclosure crisis."

Jackson-Lee also cited bankruptcy provisions left out of the bill that would have allowed homeowners to restructure their loans. Those provisions were championed by some Democrats during the negotiation period before the vote, but left out because of Republican opposition.

Rep. Joe Baca, a Democrat from California and the chairman of the Congressional Hispanic Caucus, warned on Sunday that the bill might not have enough Democratic votes to pass.

Many Republican House members who opposed the package said it expanded governmental powers and represented a drastic departure from free market principles.

Referring to the long-standing governmental guarantee that founded Fannie Mae and Freddie Mac, two mortgage giants that had to be rescued in a federal bailout earlier this year, Flake said, "Those who believe they can control and direct the market's invisible hand will eventually be slapped by it."

All About U.S. Congress • U.S. Department of the Treasury • The White House