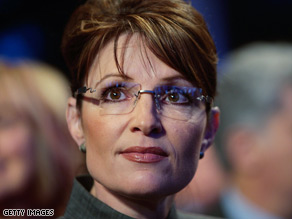 A state Senate committee subpoenaed Palin's husband, several top aides and other advisers earlier this month, but none of those served with demands for testimony appeared before the panel when it met last week.

The panel is scheduled to meet again Friday. A member of the committee said Thursday that he expects more no-shows.

In court filings, lawyers for Hollis French, the Democratic state senator overseeing the probe, and Stephen Branchflower, the attorney hired to conduct it, say Sen. John McCain's presidential campaign has moved "on many fronts" to kill the investigation since Palin became the Republican vice presidential nominee.

"Indeed, recent events demonstrate that witnesses or participants who want to stonewall Mr. Branchflower's fact-finding inquiry can count on plenty of assistance from lawyers and McCain campaign operatives," the filings state.

The filings came in response to lawsuits that Palin's allies filed last week seeking to stop the probe. The suits name as defendants the Alaska Legislative Council, the Republican-dominated committee that authorized the investigation in July, and its chairman, Democratic state Sen. Kim Elton.

The response calls the suits "clearly meritless" and "political, not legal" documents.

The McCain campaign has said that Palin will cooperate with a state Personnel Board investigation instead of the legislative probe, which the campaign has described as being "tainted" with partisan politics.

"Since Gov. Palin was named the Republican [vice] presidential nominee, it comes as little surprise that the Obama supporters leading the legislative investigation would attempt to use the proceedings to the political advantage of their candidate," said Taylor Griffin, a McCain-Palin campaign spokesman.

"All Gov. Palin is asking for is a fair and impartial review of the facts outside of the taint of partisan politics," Griffin said. "That's why she's cooperating with the Personnel Board."

Earlier this week, Democratic state Rep. Les Gara asked the state police to investigate whether state laws against witness tampering have been violated. Gara did not level allegations against a specific person, but said Republican operatives had been sent to Alaska to undermine the legislative probe.

"I think probably the McCain folks think this was just politics," Gara said Thursday. But he added, "All we know is they want to stop the investigation and suddenly the witnesses aren't talking. That's indisputable."

Ex-Public Safety Commissioner Walt Monegan says he was sacked in July after he refused to fire the governor's ex-brother-in-law, a state trooper who was involved in an acrimonious divorce from Palin's sister.

Palin has denied any wrongdoing, arguing that Monegan was fired for insubordination after he continued to press for funding for projects the governor opposed.

Palin initially agreed to cooperate with the legislative probe and have her staff testify. But since she became McCain's running mate, she and her advisers have argued that the state Personnel Board is the proper agency to investigate.

Campaign aides have repeatedly attacked French for a September 2 interview in which he said the investigation could lead to an "October surprise" for the GOP ticket. The aides have called the probe "a politicized kangaroo court."

French's committee issued the subpoenas September 12. State Sen. Bill Wielechowski, a member of the Judiciary Committee, said none of the seven people ordered to testify since last week have filed requests to quash the subpoenas with a state court -- but he did not expect them to show for Friday's hearing.

"They should all be there, or they're breaking the law," Wielechowski, a Democrat, said.

The full Senate would have to vote on any sanctions against witnesses who refuse to appear. It does not convene again until January.

Palin's husband, Todd, was among the people who refused to appear last week. The couple's attorney, Thomas Van Flein, filed papers arguing the Legislature had no authority to investigate Monegan's firing, and that state law prevents ethics investigations of candidates for state office. The vice presidency is a federal office, however.

The legislative inquiry is scheduled to be completed by October 10. There is no deadline for the investigator hired by the Personnel Board to look into Monegan's firing.

On Tuesday, a Palin spokeswoman said the Personnel Board's investigator has requested confidentiality. The spokeswoman indicated the campaign would no longer answer questions about the probe.

Monegan has vehemently denied charges of insubordination and has told CNN he was a "team player" who never did anything without approval.