WASHINGTON (CNN) -- Debates are a campaign's restart button. Voters try to erase their preconceptions and examine the candidates face-to-face, equal and unscripted -- which is why a challenger, particularly one who's running behind, is eager to have as many debates as possible. 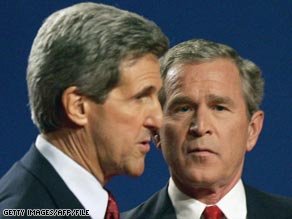 Voters said John Kerry won the debates in 2004 but they liked George W. Bush better and he won a second term.

"Let's meet every week from now until the election and talk about the real issues facing Americans.'' That was John Kerry to U.S. President George W. Bush in August 2004. Republican John McCain issued the same challenge to Democratic Barack Obama this summer, when Obama was the frontrunner in the polls.

This year there's three debates between the presidential candidates -- September 26 in Mississippi; October 7 in Tennessee and October 15 in New York state.

Debates are valuable because they provide most of the spontaneous moments in the campaign. Everything else is staged -- the rallies, the television ads, the conventions.

But debates, which are organized by the bipartisan Commission on Presidential Debates, are unscripted. The candidates do not know the questions in advance.

How do they prepare? Debate coaches grill them. They ask them tough questions on every subject likely to come up. They even coach the candidates on "body language,'' such as how to invade an opponent's space in order to appear dominant.

Watch a preview of the upcoming presidential debate »

Debates give the challenger a chance to close the stature gap with the president or the vice president. And to make the election a referendum on the incumbent president.

In 1960, John F. Kennedy, who was challenging Vice President Richard Nixon, played to concerns that the U.S. was losing its competitive edge against the Soviet Union. "Are our strength and prestige rising?" Kennedy asked in a debate. "Do people want to be identified with us?"

The 1980 race was very much in doubt when challenger Ronald Reagan went into his one and only debate with President Jimmy Carter one week before Election Day.

Reagan's hard-line image frightened many voters. He used the debate to reassure them that he wasn't a dangerous man. And to frame the election as a referendum on his opponent.

Like when President Gerald Ford prematurely liberated Eastern Europe at a 1976 debate. "The United States does not concede that these countries are under the domination of the Soviet Union,'' the president said, making specific reference to Poland, Yugoslavia and Romania.

In 1988, Michael Dukakis gave a dispassionate response when asked whether he would favor the death penalty for someone who raped and murdered his wife. "I've opposed the death penalty all of my life,'' Dukakis replied. "I don't see any evidence that it's a deterrent.''

In 1992, the first President Bush was criticized for being out of touch with ordinary Americans. That perception was reinforced during a debate when the camera caught the president looking at his watch as he took questions from voters.

One voter asked about the consequences of the national debt. "I'm not sure I get it,'' President Bush responded. The challenger got it. "Tell me how [the debt] has affected you?'' Bill Clinton responded. "Do you know people who have lost their jobs and lost their homes?''

Similarly in 2004, when CNN polled viewers after each debate, the prevailing view was that Kerry won. Voters concluded Kerry was a better debater than Bush. But that didn't get Kerry many votes.

Voters decide how to vote based on many qualities, not just debating skills. The prize for winning a debate is not winning the election.

What debates really do is keep the race open.

Many voters say: "I'm going to hit the restart button, clear the screen and watch the debates with an open mind. Then I'll decide how to vote.''