WASHINGTON (CNN) -- House conservatives urged Congress on Tuesday to "take a breath" and consider other alternatives before rushing to pass a $700 billion plan to bail out Wall Street, a measure the White House says must pass by the end of the week. 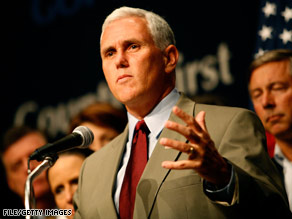 "I must tell you, there are those in the public debate who have said that we must act now. The last time I heard that, I was on a used-car lot," said Rep. Mike Pence, R-Indiana. "The truth is, every time somebody tells you that you've got to do the deal right now, it usually means they're going to get the better part of the deal."

Congress is rushing to finalize legislation that would authorize Treasury Secretary Henry Paulson to buy up to $700 billion worth of mortgage-related securities and other assets that are dragging down Wall Street institutions and freezing up credit markets.

When Paulson and Federal Reserve Chairman Ben Bernanke proposed the bailout last week, congressional leaders gave initial support for the measure and said they would work to pass it quickly.

But after the Treasury proposal arrived on Capitol Hill last weekend, lawmakers vowed to modify the plan.

The changes being floated include adding oversight of the program by an independent board, helping homeowners who are facing foreclosure, allowing the government to take an equity stake in the companies it helps, and limiting the CEO pay of companies that are aided by the bailout to the $400,000 salary of the top elected official in the land: the president.

An aide to Rep. Barney Frank, the chairman of the House Financial Services Committee, said negotiators had agreement on an oversight board and some form of help for homeowners facing foreclosure. The aide said the negotiators were "not there yet" on whether the government could take a stake in the companies it help.

CEOs of companies aided by the taxpayers could continue to bring down multimillion-dollar salaries, and that has sparked widespread anger on Capitol Hill. House Speaker Nancy Pelosi said that if the bailout passes, "the party is over" for the companies that it helps.

"The party is over for this compensation for CEOs who take the golden parachute as they drive their companies into the ground. ... The party is over for financial institutions taking risks [and] at the same time privatizing any gain they may have while they nationalize the risk, asking the taxpayer to pick up the tab," Pelosi said.

When asked by a reporter what would happen to the economy if the measure were not passed by the end of the week, White House spokesman Tony Fratto said, "I think you should think of that as unthinkable."

"I mean, every business, every employer and so every employee in America depends every day on the flow of money coming through our financial system to sustain their normal business operations," Fratto said.

However, many lawmakers on both the left and the right are asking how they can justify risking $700 billion of the taxpayers' money to help out Wall Street when many Americans are hurting economically.

And conservatives, in particular, object to the large departure from free-market principles.

"They are saying this is failure of the free markets of capitalism when, in fact, this is a failure because government injected itself into the free market, created this easy credit, these guaranteed loans, and these loans are what have turned into the bad paper that are bringing all these financial institutions down," said Sen. Jim DeMint, R-South Carolina.

Rep. Jim McDermott, D-Washington, also asked why Congress should trust the administration to administer the bailout plan properly when, in his view, it has lost its credibility with the American people.

"Trust is something that is already bankrupt. The bank of trust in this administration is absolutely bankrupt," McDermott said. "They have misled, lied, misrepresented, whatever word you want to use, on issue after issue. And now they give us seven days to come back, take out your wallet and give them everything that's in it."

But Rep. John Boehner of Ohio, the top Republican in the House, said the gravity of the situation requires quick action.