(CNN) -- Larry King talked with Meghan McCain. the daughter of the Republican presidential candidate, about her new book, "My Dad, John McCain." She also writes about her experiences on the campaign trail for the Web site, McCainBloggette.com. 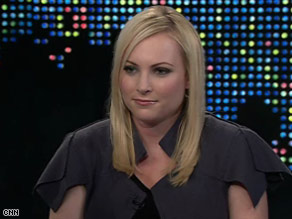 Meghan McCain said she was surprised, and now pleased, by her father's pick of Sarah Palin as running mate.

Larry King: Why a children's book, I think aimed at five to 10-year-olds, about your father?

Meghan McCain: I just thought it would be a really great way to make my father's story accessible to children. It is a really fascinating, patriotic American hero story and I had actually met a lot of people on the trail that weren't familiar with his story and --

King: What kind of father is he?

King: What's the toughest part about writing a children's book?

McCain: The illustrations were the hardest for me. How do you illustrate your father being tortured?

Watch McCain say what her parents think of the book »

King: What would your life be like if he's elected? You will have Secret Service protection.

McCain: I know. I really don't want to do that.

McCain: No, I really respect what they do, because obviously they're there to protect my family, but it's really weird. There are always people there to open up a room. I went with my mom to CVS and they had to check with CVS before we went in and there were people everywhere.

King: Were you surprised of his selection for vice president?

McCain: I think to a degree everyone was surprised because [Sarah Palin] was an unknown. But I'm very, very pleased with it. I love her. I'm really excited about it.

McCain: First of all, she's really chill. She's really nice, really friendly. She's really up on pop culture, which I always respect. She's very smart. She doesn't act entitled, which unfortunately sometimes you get with some politicians. She's just like your average girl, like just a mom. But she's very, very shrewd, very smart. I've heard her talking about issues.

Watch Larry King reveal what disappointed him in the interview »

King: They had fun with her on "Saturday Night Live."

McCain: I saw. I used to intern there.

King: You interned at "Saturday Night Live?" What was that like?

McCain: It was incredible. I was there for the Ashlee Simpson lip synching incident. It was fantastic.

King: You have blogged in support of Bristol Palin, who is with child, as we know. What made you speak out on that?

McCain: I have grown up in politics forever. My father has been kind of pretty public. He ran for president when I was 14. I know what it's like to have children become a point of criticism or used as an example. She's 17 and she grew up in a small town in Alaska. I think people should support her and the media should lay off a little. She's very young and she's just trying to live her life. I don't think she should be an example of what to do or not to do. I just think she should be Governor Palin's daughter.

King: What do you make of those who say that if you criticize Governor Palin, it's sexism?

King: You think Senator Clinton was a victim of it, too?

King: What do you think of Senator Obama?

King: What are your plans the rest of the campaign?

McCain: Continue to blog. It's given me so much. I really enjoy doing it. It's a way for me to show the world what it's like to be on the campaign trail as a 23-year-old woman, when your father's [running for] president and it's been a way for me to show people what my parents are really like. I think journalists are not going to be in my mom's hotel room when she is in her pajamas. We put pictures of my mom in her pajamas on the blog. I love what it's done.