Poll: Concerns about terrorist attacks at lowest level since 9/11

(CNN) -- Concerns about an impending terrorist strike are at the lowest point on record since the attacks of September 11, 2001, according to a new CNN/Opinion Research Corp. poll. 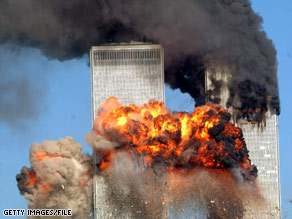 Sixty percent of Americans thought a terrorist attack was likely after the first anniversary of 9/11.

Furthermore, only about one in 10 Americans says terrorism is the most important issue in deciding their vote for president, the poll found.

Only 14 percent of Americans say an impending terrorist attack is likely in their community.

And Americans do appear to be more confident that Osama bin Laden will eventually be captured or killed: Just about half say the U.S. will ultimately find the September 11 mastermind, up 7 points from this time last year.

But in frustrating news for the White House, Americans appear to give little credit to President Bush for the lack of a terrorist strike over the last seven years: Only 37 percent believe that the president and his policies are the chief reason there has not been a strike on U.S. soil. Overall, he has a 28 percent approval rating, tying his all-time low in CNN/ORC polling.

Watch how the Pentagon is memorializing 9/11 »

Opinions on the war in Iraq, on the other hand, have changed slightly, with a slight majority (52 percent) now saying that the war is an essential part of the war on terrorism. That represents a shift from 2006, when a majority of Americans said the war in Iraq was a distraction.

Support for the Iraq war is also up slightly over the past six months, from 30 percent in June to 37 percent now.

But as Americans increasingly approve of the war, it becomes less of an important issue in their choice for president: Now, only 13 percent of registered voters said it was most important to their vote, compared with the 56 percent who named the country's economic woes as their chief concern.

Just over 60 percent of Americans continue to oppose the conflict, however. Two-thirds want the next president to remove most U.S. troops from Iraq within a few months of taking office, numbers that appear to put Republican presidential candidate John McCain on the opposite side of most voters on that issue.

"The good news for John McCain is that most Americans think he would be better at handling terrorism than [Barack] Obama," CNN Polling Director Keating Holland said.

"The bad news is that terrorism seems to matter most to the people McCain already has squarely in his camp: Republicans. Just over 20 percent of Republicans say that terrorism is their number one issue; for Democrats and independents, that's in single digits."