Despite political climate, Michigan could go either way

WIXOM, Michigan (CNN) -- The lock on the gate is rusting, as are the ramps once used to drive shiny new Lincolns onto transport trucks. The giant sign that once carried the Ford logo is painted white, the factory is shuttered, and the jobs gone. 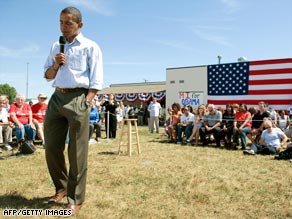 In Michigan, the evidence of economic strain is everywhere -- from the vacant Ford plant in Wixom, to the barren lot a short drive away in Pontiac that was once home to a GM truck assembly line, to the empty storefronts with "For Lease" signs in the windows.

With an unemployment rate of 8.5 percent and an unpopular Republican president, the political climate should favor Democrats, especially in Michigan, where 1988 marks the last time the GOP carried the state in a presidential election.

One reason McCain is within striking distance is his support in the critical Detroit suburbs, which include Oakland County and neighboring Macomb County. Those communities are heavily shaped by the fortunes of the auto industry and are known in national politics as the home of the legendary Reagan Democrats. And more and more, they're becoming known as places where independent voters swing close elections.

See which states are toss-ups »

In the new poll, McCain leads 55 percent to 37 percent in the Detroit suburbs, while Obama has the edge, 47 percent to 42 percent, among voters who identify themselves as independents.

Watch how the suburbs have become political battlegrounds »

Brent Colburn, communications director for Obama in Michigan, says Democratic organizing is in full swing. "We are building efforts around all of them," Colburn said of the state's diverse voting blocs, noting that key Obama targets include African-Americans, union members and students.

Watch more on the battle for Michigan »

Because of Sen. Hillary Clinton's support among blue-collar voters here, "We did fear the Obama-Clinton ticket," Cowan tells CNN. Instead, in the GOP view, "He [Obama] kind of made the safe choice for VP, and John McCain made a bold choice for VP, which has gotten everybody's attention." Vote: Which state is the most important swing state?

Among those impressed with the Palin pick is Ray Gardella, who began his homebuilding business in the Detroit suburbs 35 years ago. Gardella was a McGovern Democrat in those days, but leans more Republican now. He says McCain and Palin "are more in line with my values" and says he isn't sold on Obama's talk of change.

"He has talk, but we need a lot more than that, especially in the economy we have," Gardella said outside a home site in Bloomfield Hills. "Certainly a strong candidate. An easy-to-listen-to candidate, but I don't think he gives us the substance we need."

Like many in his generation here, Gardella shrugs off Obama's talk that McCain has been in Washington too long to change it.

All About Michigan • National Economy