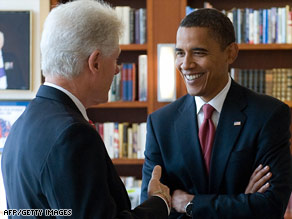 "I predict that Sen. Obama will win and win handily," Clinton said when asked his opinion on the state of the race.

Obama smiled at Clinton's prediction, saying, "There you go, you can take it from the president of the United States. He knows a little something about politics."

The two men chatted with reporters in a photo-op at Clinton's Harlem office before sitting down for a private lunch.

Clinton is scheduled to campaign for Obama in Florida once he wraps up some business with his Clinton Global Initiative. According to aides, the former president will do a mix of fundraisers and public appearances on behalf of the Democratic ticket throughout the fall.

"I've agreed to do a substantial number of things, whatever I'm asked to do," Clinton said.

The image of the two men meeting comes as a relief to many Democrats who have been hoping to put to rest the "Clinton-Obama rift" storyline. Both sides agreed a face-to-face meeting with the former president would go a long way toward putting the contentious primary season behind them.

Hillary Clinton campaigned for Obama earlier in the week in Florida and will campaign in Ohio this weekend.

He opened up the event by telling everyone he did not plan to talk politics.

"Let's pull together, let's say together. This is nothing to do with Democrats, Republicans -- it's about Americans," he said.

The two appeared together at ground zero in New York City to lay roses at the 9/11 memorial and speak with first responders and family members of victims. They were joined by Cindy McCain and New York City Mayor Michael Bloomberg. iReport.com: See photos from the scene

Later Thursday, Obama and McCain will share the stage briefly as they appear back-to-back at the ServiceNation Presidential Candidates Forum at Columbia University in New York.

The pair drew a crowd of more than 20,000 in the sturdily Democratic county of Fairfax, Virginia, on Wednesday. That was their largest crowd to date.

After that event, Palin returned home so she could attend her son's deployment ceremony on Thursday. Track Palin enlisted in the U.S. army exactly one year ago. His brigade is going to Iraq.

Later Thursday, Palin will give her first television interview with a national media outlet since being named as McCain's running mate.

The Alaska governor will spend two days with ABC's Charlie Gibson. The interview will be part sit-down, part walk-and-talk at various locations in Alaska.

So far, Palin has taken no questions from reporters traveling with her on the campaign trail.

An issue that could come up in the interview is the controversy that emerged this week over her per diem charges as governor.

The Washington Post reported Tuesday that Palin had billed the state a per diem for 312 days she spent at home, and requested reimbursement for plane rides and hotel rooms for her husband and children, including a $707 room when her daughter accompanied her on a trip to New York to attend a Newsweek forum.

The paper noted that officials said the claims were justified under existing state regulations. The McCain campaign said that Palin had reduced yearly travel expenses by roughly 80 percent of the amount spent by predecessor Frank Murkowski.

Palin's spokeswoman Maria Comella said the governor's top priority was "creating accountability and transparency in government to root out waste and corruption."

"Gov. Palin is obviously expected to travel frequently around the state for community events and to meet with Alaskans. This is part of her job, and it's reasonable that her travel expenses, which were reduced dramatically from the previous administration, would be covered," Comella said in a statement.

Palin is expected to rejoin McCain on the trail early next week.