(CNN) -- Her faith is one of the reasons many evangelical Christians are excited about Sarah Palin's addition to the Republican presidential ticket, but the Alaska governor's evangelical beliefs have also drawn scrutiny. 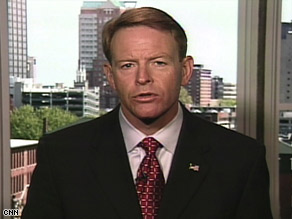 Evangelicals are closely watching whether the McCain campaign embraces Palin's religious views or shies away from them, Tony Perkins, president of Family Research Council, told CNN.

Perkins sat down with CNN's John Roberts on Tuesday to discuss how the vice presidential pick's faith could influence the presidential election.

Roberts: For a couple of decades, she was a member of the Pentecostal Assembly of God church. Six years ago, she changed to the Wasilla Bible Church. I read an article in which one of her former pastors suggested [the McCain campaign] may be playing down her faith because there may be some misunderstanding about her Pentecostalism. What do you think about all of this?

Perkins: Obviously people, the polling data would suggest people want a leader or leaders that believe in God [and] pray, and I think there's some sense that there's a greater accountability there. But I think the campaign, John, is at a critical point. John McCain made an incredible selection. He has turned around the campaign that I think was moving south, and there's enthusiasm, excitement and hope among social conservative voters.

But ... the next few days, next couple of weeks will be very critical because as you pointed out, her faith has become an issue. It's being attacked, being used as a weapon against her. People are watching. It will be very important how the McCain campaign handles this. If they become defensive and run from it and try to hide the fact that there is this element of faith, then I think it's going to turn off social conservatives, evangelicals, orthodox Christians.

Is the Palin pick a risk? »

If they say, "Hey, why should someone have to check their faith at the door and move towards the base," I think it's going to energize, you know, the socially conservative voters more. It's very important how they deal with this in the next few days.

Roberts: You say people are attacking her because of her faith. Are they attacking her or asking legitimate questions, such as when she said at the Assembly of God church back in June. ...

[Palin] talked about U.S. troops in Iraq, and she put it this way: "Our national leaders are sending them out on a task that's from God." Even some Pentecostals say that could mean that the U.S. is in a holy war with the Muslim world.

Perkins: I think it's important that you see where these convictions lead her on policy issues, and I think that is part of the scrutiny that she will undergo from socially conservative voters.

Roberts: Do you have any idea at this point about how her faith will inform how she governs?

Perkins: No. There's not a lot of evidence in Alaska other than, you know, she's conservative. I mean there's not -- you can't point to a lot of policies that people say [she adopted] because she's a conservative evangelical.

That will be a critical decision they make in the next several days.