Palin backed 'bridge to nowhere,' then opposed it

ANCHORAGE, Alaska (CNN) -- Republican vice presidential candidate Sarah Palin's boast to have opposed the infamous "bridge to nowhere" is a staple of the Alaska governor's stump speech, but her record is more complicated than the one-liner. 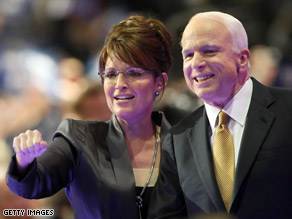 She repeated the line Tuesday in Lebanon, Ohio, telling supporters, "I told Congress, 'Thanks, but no thanks' for that bridge to nowhere up in Alaska. If our state wanted a bridge, we were going to build it ourselves."

But Palin originally supported construction of the bridge, which would have linked the city of Ketchikan with its airport on sparsely populated Gravina Island.

"I'm not going to stand in the way of progress that our congressional delegation -- in the position of strength that they have right now -- they're making those efforts for the state of Alaska to build up our infrastructure," Palin said during a debate shortly before her 2006 election as governor. "I would not get in the way of progress of this project or other projects they're working so hard on."

Her office canceled work on the span in 2007 after it became a symbol of congressional "pork-barrel" excess, but kept money that Congress had appropriated for the project, using the funds instead for state transportation projects.

Watch an ex-aide defend Palin's position on the bridge »

Stapleton said Palin "knows that we can do it for far less, and she knows the state can handle it."

In a statement announcing the cancellation of the Gravina Island project, Palin complained that public opposition to the bridge "is based on inaccurate portrayals of the projects here."

"But we need to focus on what we can do, rather than fight over what has happened," she said in the statement.

Campaign aides also have had to explain the fine print on another applause line from Palin's stump speech -- that she put the luxury jet her predecessor purchased for state travel up for sale on eBay.

Although the jet was for sale on the online auction site, it failed to draw sufficient bids and was later sold at a loss through an ordinary aircraft brokerage.

Democrats also are trying to exploit a gap between McCain's famous opposition to congressional earmarks and Palin's efforts to obtain those appropriations for Alaska during her time as governor and as mayor of the Alaskan town of Wasilla. Palin has sought about $450 million in earmarks from the state's congressional delegation since becoming governor, and about $27 million for Wasilla during her second term as mayor from 1998 to 2002, according to state records and documents from the Washington-based watchdog group Taxpayers for Common Sense.

"All the things that John McCain says [are] bad, she lobbied to get," Sen. Barack Obama, the Democratic presidential candidate, said Monday. "When it came to the bridge to nowhere, she was for it until everybody started raising a fuss about it."

The bridge was backed by the senior members of Alaska's congressional delegation -- Rep. Don Young, the former chairman of the House Transportation Committee, and Sen. Ted Stevens. Tom Schatz of Citizens Against Government Waste said Palin gets credit for taking on her fellow Republicans over the issue.

"Anyone who takes on Ted Stevens and Don Young when it comes to transportation is taking on two very powerful interests in Washington," Schatz said.

Young is fighting to hold the seat he has occupied for more than three decades against Lt. Gov. Sean Parnell, a Republican challenger Palin supported against the veteran congressman. Stevens, who also is trying to be re-elected this year, has pleaded not guilty to federal charges of lying on his Senate ethics disclosure forms and is pushing for a trial before November's election.

While Democrats have questioned her campaign claims, some Alaskans see Palin as a modern-day Robin Hood who has returned money to taxpayers. The rising price of oil has bolstered the state's balance sheets, allowing Alaska to sock away $5 billion in savings -- in large part because of an increase in the tax on oil companies that Palin supported.

The state's Permanent Fund is now worth more than $35 billion, and Palin approved payments of $3,269 to every Alaska resident this year -- a $1,200 increase in the annual dividend each resident receives.

"She has helped to balance our budget. She has done a very good job," Alaskan Kim Brink said. "She gave, she fought to get us a little bit of extra money in these hard economic times."

But state spending has increased under her tenure. And while she has used her line-item veto to cut funds for some government programs, her critics in Alaska complain she has the wrong priorities.