McCain offers his prescription for U.S.

ST. PAUL, Minnesota (CNN) -- Sen. John McCain gave his acceptance speech as the Republican presidential nominee Thursday night. Here is a look at what McCain said he would do, if elected, about a variety of topics: 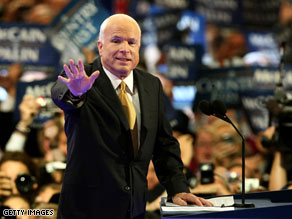 • Keep taxes low and cut them where he could.

• Prepare workers to compete in the world economy.

• Help workers who've lost a job that won't come back and find a new one that won't go away.

• Use community colleges to help train people for new opportunities in their communities.

• Retrain workers in industries that have been hard hit and cover the pay difference during retraining.

Watch the highlights of the GOP convention »

• Create millions of new jobs, "jobs that will be there when your children enter the work force."

McCain said he would have the United States:

• Increase the use of wind, tide, solar and natural gas.

• Encourage the development and use of flex fuel, hybrid and electric automobiles.

• Reduce government spending and get rid of failed programs to "let you keep more of your own money to save, spend and invest as you see fit."

• A serious blow has been dealt to al Qaeda, but the terror network has not been defeated and will strike again if able.

• Iran is the chief state sponsor of terrorism and on the path to acquiring nuclear weapons.

• Russia's leaders have rejected democratic ideals, invaded a small, democratic neighbor, Georgia, to gain more control over the world's oil supply, intimidated other neighbors and have ambitions of reassembling the Russian empire.