(CNN) -- Sen. John McCain got one thing right Thursday when he said the Republicans had let Washington change them, Democrats said after his speech. 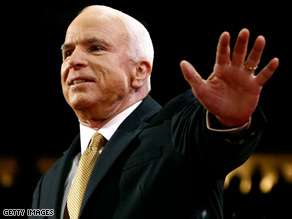 On Thursday, Democrats called John McCain "a Bush partisan 90 percent of the time."

The proof was in his voting record when he supported President Bush's policies 90 percent of the time, they said.

In his speech, McCain said that his party "was elected to change Washington" but that Republicans "let Washington change them."

"He admonished the 'old, do-nothing crowd' in Washington but ignored the fact that he's been part of that crowd for 26 years, opposing solutions on health care, energy and education, " Burton said.

"He talked about bipartisanship but didn't mention that he's been a Bush partisan 90 percent of the time, that he's run a Karl Rove campaign and that he wants to continue this president's disastrous economic and foreign policies for another four years," Burton said. "With John McCain, it's more of the same."

But with Obama, Americans can look forward to changes that will directly help them and fight special interests, Burton said.

"That's not the change Americans need. Barack Obama has taken on the special interests and the lobbyists in Illinois and in Washington, and he's won.," Burton said. "As president, he'll cut taxes for 95 percent of all working families, provide affordable health care to every American, end the tax breaks for companies that ship our jobs overseas and eliminate the oil we import from the Middle East in 10 years."

Robert Gibbs, Obama's senior adviser, said that after days of speeches that included nothing regarding the economic policies Americans care so much about, he was waiting to see whether McCain would finally address those issues.

"I think, like me, a lot of those people are still sitting around wondering why they didn't hear that tonight," Gibbs said.

Hillary Clinton campaign manager Terry McAuliffe also attacked McCain's speech, which pitted Obama's proposed policies against his own. McCullough said that McCain distorted Obama's record and that many of the statements he made were "patently false."

Gibbs said that after hearing McCain's policies, which he outlined in his speech, he is confident McCain is the wrong man for the job. iReport.com: Your thoughts on McCain's big night

Clinton, who was praised for her achievements during the Republican National Convention, said in a statement that McCain's speech put a cap on a convention drastically different than that of the Democrats the week before.

Clinton said that although Obama and his running mate, Joe Biden, offered new ideas to solve America's problems and bring change, the Republican ticket did not.

"After listening to all the speeches this week, I heard nothing that suggests the Republicans are ready to fix the economy for middle-class families, provide quality affordable health care for all Americans, guarantee equal pay for equal work for women, restore our nation's leadership in a complex world or tackle the myriad of challenges our country faces," Clinton said in the statement. "So, to slightly amend my comments from Denver: No way, no how, no McCain-Palin."