St. PAUL, Minnesota (CNN) -- Cindy McCain praised her husband, Republican presidential nominee John McCain, as "someone of unusual strength and character" in a speech to the Republican National Convention on Thursday. 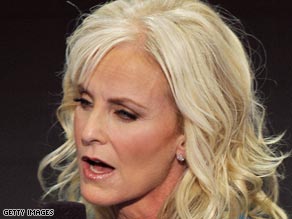 "You can trust his hand at the wheel," she said, adding: "But you know what -- I've always thought it's a good idea to have a woman's hand on the wheel as well. So how about Gov. Sarah Palin!" Delegates erupted in cheers at the mention of McCain's running mate, the governor of Alaska.

Cindy McCain said her husband's run for the White House "is not about us. It's about our special and exceptional country."

She called Americans the most generous people in history, and said "our hearts are still alive with hope and belief in our individual ability to make things right if only the federal government would get itself under control and out of our way," prompting cheers from the delegates.

Cindy McCain wore jewelled pins reading "USMC" and "Navy" and a flag with a star in honor of her two sons in military service, Jimmy and Jack.

She introduced a Rwandan genocide survivor she identified only as Ernestine to illustrate the importance of forgiveness, and said John McCain also exemplified the virtue.

"Forgiveness is not just a personal issue: it's why John led the effort to normalize relations with Vietnam; to retrieve the remains of our MIAs; to bring closure to both sides," she said.

"That's leadership -- national leadership. And it's leading by example," she said.

"This is a good man, a worthy man, I know," she said. "I have loved him with all my heart for almost 30 years and I humbly recommend him to you tonight as our nominee for the next president of the United States."

She left the stage to the strains of "Johnny B. Goode," which McCain often uses on the campaign trail.