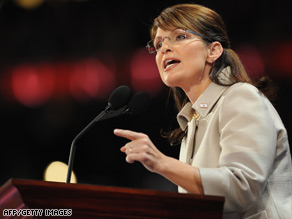 "The speech that [Alaska] Gov. Palin made was well delivered, but it was written by George Bush's speechwriter and sounds exactly like the same divisive, partisan attacks we've heard from George Bush for the last eight years," said Bill Burton, the campaign spokesman for Sen. Barack Obama.

"If Gov. Palin and John McCain want to define 'change' as voting with George Bush 90 percent of the time, that's their choice, but we don't think the American people are ready to take a 10 percent chance on change."

In her speech, Palin drew large applause for attacking Obama for writing two memoirs, but no major laws or reforms.

"I hope if she continues that argument that she'll get her facts straight," Gibbs said.

Gibbs said Obama had worked on strong ethics reform in the state and U.S. legislatures.

In her speech, Palin highlighted her ethics reforms in Alaska as proof she was qualified for the job. iReport.com: I touched Obama's "styrofoam" columns

"While I was at it, I got rid of a few things in the governor's office that I didn't believe our citizens should have to pay for," Palin said. "That luxury jet was over the top. I put it on eBay."

"I thought [her speech] was a tirade of attacks and it was really surprising that the case that Gov. Palin made for her candidacy for vice president is her experience in negotiating the sale of her state's plane on eBay," she said. If, God forbid, anything happens to John McCain, then we are in for a scary proposition."

Kiki McLean, who served as senior adviser to Clinton's campaign, called most of the jabs "great political theater."

McClean, Gibbs and Wasserman Schultz all said that for the second night in a row, the slams against the Democrats were merely a distraction from the fact that nobody has offered detailed plans on the issues Americans care most about.

"For the second night in a row we have yet to see what John McCain will do to get this economy on track, create more jobs," Gibbs said. "That's what Americans want to hear."

Palin also took a swing at Senate Majority Leader Harry Reid of the "current do-nothing Senate" for comments he made about McCain.

"[Reid] said, 'I can't stand John McCain,' " Palin said. "Ladies and gentlemen, perhaps no accolade we hear this week is better proof that we've chosen the right man. Clearly what the majority leader was driving at is that he can't stand up to John McCain."

"Anyone who knows Sen. Reid knows he never backs down when he's fighting for what's right and that he always stands up to John McCain when he is wrong," Manley said. "Shrill and sarcastic political attacks may fire up the Republican base, but they don't change the fact that a McCain-Palin administration would mean four more years of failed Bush-Cheney policies."

The Republican vice presidential pick continued to take swings at Obama and his campaign after they raised allegations that she is unfit and inexperienced for the job of vice president. In the past week, she has also faced tough criticism after revealing news that her 17-year-old unmarried daughter is pregnant. iReport.com: Mother of 5 fit to be VP?

Both Obama and Republican candidate McCain criticized the attacks, saying family members were off limits. But that didn't stop former Massachusetts Gov. Mitt Romney from taking a perceived jab at Michelle Obama, who once said her husband's White House run made her "really proud" of her country for the first time.

"Just like you, there has never been a day when I was not proud to be an American," Romney said.

Obama's campaign fired back at Romney's remarks before his speech Wednesday night, calling them, "as pathetic as [Romney's] failed presidential campaign."

"Barack Obama has said that families are 'off-limits', and we thought that John McCain agreed," Obama adviser Anita Dunn said. "But tonight, John McCain's handpicked attack dog, Mitt Romney, exposed the fake outrage that the Republicans have been peddling all week as the blatant hypocrisy that it is."

"The McCain team's disgusting attack on Barack Obama's wife shows they would rather generate false outrage to distract from their own problems than talk about the issues facing the American people," Dunn said. "Mitt Romney's attack on a candidate's wife is as pathetic as his failed presidential campaign."