Giuliani: You're hiring someone to do a job 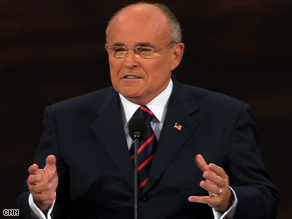 Giuliani: Thank you very much, and good evening. Almost exactly one year ago today, during a presidential debate in Durham, New Hampshire, I said that, if I weren't running for president, I'd be supporting John McCain.

Well, I'm not running for president, and I do support John McCain.

This already has been the longest presidential campaign in history, and sometimes to me it felt even longer.

The American people realize this election represents a turning point. It's the decision to follow one path or the other. We, the people, the citizens of the United States, get to decide our next president, not the left-wing media, not Hollywood celebrities, not anyone else but the people of America.

To those Americans who still feel torn in this election, I'd like to suggest one way to think about this to help make a choice in 2008.

Think about it this way. You're hiring someone to do a job, an important job, a job that relates to the safety of yourself and your family. Imagine that you have two job applications in your hand with the name and the party affiliations blocked out.

On the one hand, you've got a man who's dedicated his life to the service of the United States. He's been tested time and again by crisis. He has passed every test.

Even his adversaries acknowledge -- Democrats, Republicans, everyone acknowledges that John McCain is a true American hero.

He -- he loves America, as we all do, but he has sacrificed for it as few do.

As a young man, he joined the military. And being a "Top Gun" kind of guy, he became a fighter pilot. He was on a mission over Hanoi when his plane was shot down.

He was tortured in a POW camp, but he refused his captors' offer of early release, because this is a man who believes in serving a cause greater than self-interest, and that cause is the United States of America. America comes first.

He has proved his commitment with his blood. He came home a national hero. He had earned a life of peace and quiet, but he was called to public service again, running for Congress, and then the United States Senate, as a proud foot soldier in the Reagan revolution.

His principled independence never wavered. He stood up to special interests. He fought for fiscal discipline and ethics reform and a strong national defense.

On the other hand, you have a resume from a gifted man with an Ivy League education. He worked as a community organizer. What? He worked -- I said -- I said, OK, OK, maybe this is the first problem on the resume.

He worked as a community organizer. He immersed himself in Chicago machine politics.

Then he ran for -- then he ran for the state legislature and he got elected. And nearly 130 times, he couldn't make a decision. He couldn't figure out whether to vote "yes" or "no." It was too tough.

You have to make a decision.

A few years later -- a few years later, he ran for the U.S. Senate. He spent most of his time as a celebrity senator: no leadership, no legislation to really speak of.

His rise is remarkable in its own right. It's the kind of thing that can happen only in America.

He is the least experienced candidate for president of the United States in at least the last 100 years.

Not a personal attack, a statement of fact. Barack Obama has never led anything, nothing, nada.

The choice -- the choice in this election comes down to substance over style. John McCain has been tested; Barack Obama has not.

Tough times require strong leadership, and this is no time for on-the-job training.

We agree. We agree with Joe Biden... one time, one time, when he said that, until he flip-flopped and changed his position. And, yes, being president means being able to answer that call at 3:00 in the morning. And that's the one time we agree with Hillary.

But I bet you never thought Hillary would get applause at this convention. She can be right. Well, no one can look at John McCain and say that he's not ready to be commander in chief. He is. He's ready.

I learned as a trial lawyer a long time ago, if you don't have the facts, you've got to change them. So our opponents want to re- frame the debate.

They would have you believe that this election is about change versus more of the same, but that's really a false choice, because there's good change and bad change.

Because change is not a destination, just as hope is not a strategy.

John McCain -- John McCain will bring about the change that will create jobs and prosperity. Let's talk briefly about specifics.

John McCain will lower taxes so our economy can grow.

He'll reduce government to strengthen our dollar. He'll expand free trade so we can be more competitive. And he will lead us to energy independence so we can be free of foreign oil.

And -- and he'll do it with an all-of-the-above approach, including nuclear power, and, yes, off-shore oil drilling.

This -- this -- this and a lot more is the kind of change that will create growth, jobs, and prosperity, not what they want to do, tax us more, increase the size of government, increase tariffs, hurt jobs, send jobs elsewhere.

We need John McCain to save our economy and make sure it grows, but we need it for a more important purpose. There's one purpose that John McCain understands, Republicans understand, that overrides everything else: John McCain will keep us on offense against terrorism at home and abroad.

For -- for four days in Denver, the Democrats were afraid to use the words "Islamic terrorism."

I imagine they believe it is politically incorrect to say it. I think they believe it will insult someone. Please tell me, who are they insulting if they say "Islamic terrorism"? They are insulting terrorists.

Of great concern to me, during those same four days in Denver, they rarely mentioned the attacks of September 11, 2001. They are in a state of denial about the biggest threat that faces this country. And if you deny it and you don't deal with it, you can't face it.

John McCain can face the enemy. He can win, and he can bring victory for this country.

Let's look at just one example at a lifetime of principled stands that John McCain's brought about: his support for the troop surge in Iraq. The Democratic Party had given up on Iraq.

And I believe, ladies and gentlemen, when they gave up on Iraq, they had given up on America.

In the single biggest policy decision of this election, John McCain got it right, and Barack Obama got it wrong.

Senator McCain -- Senator -- Senator McCain was the candidate most associated with the surge, and it was unpopular. What do you think most other politicians would have done in a situation like this?

They would have acted in their self-interest, and they would have changed their position in order to win an election. How many times have we seen Barack Obama do this?

Obama -- Obama promised to take public financing for his campaign, until he broke his promise.

Obama -- Obama was against wiretapping before he voted for it.

Well, I'll tell you, if I were Joe Biden, I'd want to get that V.P. thing in writing.

Our hero, our candidate, John McCain said, "I'd rather lose an election than a war." Why? Because that's John McCain.

When Russia rolled over Georgia, John McCain immediately established a very strong, informed position that let the world know how he'll respond as president at exactly the right time. Remember his words? Remember what John McCain said? "We are all Georgians."

Obama's -- talk about judgment. Let's look at what Obama did. Obama's first instinct was to create a moral equivalency, suggesting that both sides were equally responsible, the same moral equivalency that he's displayed in discussing the Palestinian Authority and the state of Israel.

Later -- later, after discussing this with his 300 foreign policy advisers, he changed his position, and he suggested the United Nations Security Council could find a solution.

Apparently, none of his 300 foreign policy security advisers told him that Russia has a veto power in the United Nations Security Council.

By the way, this was about three days later. So -- so he changed his position again, and he put out a statement exactly like the statement of John McCain's three days earlier.

I have some advice for Senator Obama: Next time, call John McCain.

In choosing Governor Sarah Palin as his running mate, John McCain has chosen for the future.

The other guy looked back. John looked forward.

Gov. Palin represents a new generation. She's already one of the most successful governors in America and the most popular.

And she's already had more executive experience than the entire Democratic ticket combined.

She's been a mayor. I love that.

I'm sorry, Barack, that it's not flashy enough. Maybe they cling to religion there.

Well -- well, the first day -- as far as I'm concerned, the first day she was mayor, she had more experience as an executive than -- than Obama and Biden combined.

She's got an 80 percent approval rating. You never get that in New York City, wow.

She -- she -- she is shaking up Alaska in a way that hasn't happened in maybe ever. And with John McCain, with his independent spirit, with his being a maverick, with him and Sarah Palin, can you imagine how they're going to shake up Washington?

Whew, look out. Look out.

One final point. And how -- how dare they question whether Sarah Palin has enough time to spend with her children and be vice president. How dare they do that.

When do they ever ask a man that question? When?

Well, we're at our best when we are expanding freedom. We're the party that has expanded freedom from the very beginning, from ending slavery to making certain that people have freedom here and abroad.

And now the job is up to us. Let's get John McCain and Sarah Palin elected, and let's shake up Washington and move this country forward.