Dozens arrested outside of Republican convention

ST. PAUL, Minnesota (CNN) -- At least 56 people were arrested Monday after police fired projectiles and used pepper spray and tear gas to disperse a crowd demonstrating near the site of the Republican National Convention. 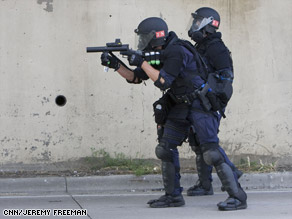 CNN photojournalists witnessed police detaining between 20 and 30 individuals with plastic handcuffs a few blocks from the security perimeter around the Xcel Center in downtown St. Paul.

A crowd of 300 individuals was later seen conducting what appeared to be a sit-in at a parking lot near the Mississippi River.

Thomas Walsh, a public information officer for the St. Paul Police Department, said Monday afternoon that 13 people had been arrested so far, accused of damage to property and conspiracy to riot. Those arrested will be formally charged in Ramsey County District Court on Tuesday, he said.

The arrest of the "anarchists" came after nearly 5,000 protesters marched peacefully outside the site of the convention site.

While Walsh described the individuals as a being part of a "splinter group" from the main body of protesters, he said it would not characterize their activity as being a protest.

Watch the police use pepper spray »

"I think they did a disservice to those that came here to protest," he said.

Besides damaging private property, the group also smashed in the windows of five squad cars. iReport.com: Protesters swarmed at RNC

Police on Sunday saw little disruption in advance of the convention, which is being greatly scaled back because of Hurricane Gustav. And, despite the disruptions Monday, the security scheme is working as planned, Walsh said.

Watch the police take on the protesters »

"We had some expectation that there may be some of this activity," he said.

The Republican convention, which officially began Monday, has been designated a "national special security event," which means the Secret Service is responsible for planning and implementing the security scheme.

Numerous federal agencies are helping to provide security. The Federal Protective Service, the Customs and Border Protection agency, the FBI, the Coast Guard, the Transportation Security Administration and other agencies are providing resource to help the Secret Service implement its plan.