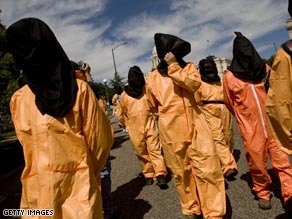 The Republican convention, which begins Monday, has been designated a "national special security event," which means the Secret Service is responsible for planning and implementing a security scheme.

Holtz, who was at the Joint Information Center set up by the Secret Service to help coordinate the activities of the various law enforcement agencies involved in securing the event, said things were relatively quiet.

Nine individuals were arrested for trying to enter a restricted area and later charged with misdemeanor trespassing, Holtz said, and eight of the nine had already been released by Sunday evening.

St. Paul has been preparing for the Republicans' arrival for over a year, but there are still questions about whether the cities are prepared to handle the protesters who are expected to flood into the city.

St. Paul officials have planned for about 25,000 protesters, but the protest groups themselves are hoping for double that number.

Protest groups estimated similar numbers for the Democratic convention last week in Denver, Colorado, but the tens of thousands of protesters never materialized.

"That was peaceful, and we anticipate the other protests this week to be peaceful," he said.

On Saturday law enforcement officers say they uncovered evidence of an anarchist conspiracy to riot and disrupt the convention during a series of pre-convention raids.

In the raids, sheriff's deputies for Ramsey County -- which contains the convention host city of St. Paul --arrested a number of what they described as anarchists. They also found bricks and human waste they say was meant to be thrown at police, slingshots to launch projectiles, tacks meant to puncture tires and Molotov cocktails.

Officials say the group's plan was to sabotage buses and block bus routes.

"One group, the RNC Welcoming Committee, is our target," Ramsey County Sheriff Bob Fletcher said. "It's an anarchist group planning to commit criminal acts and harm our officers."

But lawyers and family members for those arrested say the sheriff is overstating his case.

Geneva Finn, a lawyer for the protesters, also said the they were not planning to do anything illegal or violent.

"Since there is no way of knowing what's true in advance of the convention, the authorities see a danger in underestimating the potential for disruption," he said.

On Sunday, Holtz of the St. Paul Police Department said he was unaware of any specific threat from anarchist.