Obama spells out plans for change

DENVER, Colorado (CNN) -- Democratic presidential nominee Sen. Barack Obama called his acceptance speech on Thursday "the American Promise." It included a list of promises for change that he said, "We need right now." 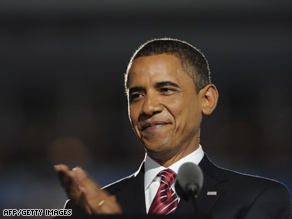 Here is a look at what Obama said he would do, if elected, about a variety of topics:

• Cut taxes "for 95 percent of all working families."

• "Eliminate capital gains taxes for the small businesses" and start-ups "that will create the high-wage, high-tech jobs of tomorrow."

• Advocate "a tax code that doesn't reward the lobbyists who wrote it, but the American workers and small businesses who deserve it."

• Set a goal that "in 10 years, we will finally end our dependence on oil from the Middle East."

• "Help our auto companies retool, so that the fuel-efficient cars of the future are built right here in America."

• Make it easier for Americans to afford U.S.-built, fuel-efficient cars.

• Have the federal government "invest $150 billion over the next decade in affordable, renewable sources of energy -- wind power and solar power and the next generation of biofuels." Doing so, he said, would "lead to new industries and 5 million new jobs that pay well and can't ever be outsourced."

• "Finally meet our moral obligation to provide every child a world-class education."

• Make sure young Americans can afford college if they serve their community or country.

See the highlights of the Democratic convention's last day »

• "Finally keep the promise of affordable, accessible health care for every single American."

• Lower premiums for those who have health care and let those without coverage "get the same kind of coverage that members of Congress give themselves."

• Make sure insurance companies "stop discriminating against those who are sick and need care the most."

• Close the pay gap between the sexes.

• Change bankruptcy law "so that your pensions are protected ahead of CEO bonuses."

• Pay for "every dime" of his plans' costs "by closing corporate loopholes and tax havens that don't help America grow."

• Cut federal programs that don't work and improve those that do while reducing their costs.

• "End this war in Iraq responsibly and finish the fight against al Qaeda and the Taliban in Afghanistan."

• "Only send our troops into harm's way with a clear mission and a sacred commitment to give them the equipment they need in battle and the care and benefits they deserve when they come home."

• "Restore our moral standing" in the world.

• "Build new partnerships to defeat the threats of the 21st century: terrorism and nuclear proliferation, poverty and genocide, climate change and disease."

• Work with people on all sides of the issue to reduce unwanted pregnancies.

• Uphold the Second Amendment but also keep "AK-47s out of the hands of criminals."

• Help ensure that gays and lesbians have the right "to visit the person they love in the hospital and to live lives free of discrimination."