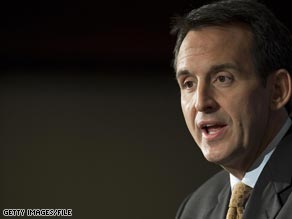 Pawlenty on Friday also told WCCO Radio in Minneapolis-St. Paul that he will not be in Dayton, Ohio, where the presumptive Republican presidential nominee is expected to unveil his choice of a running mate at a rally later Friday.

The McCain campaign said it's hoping to have 15,000 people at the Ohio event, roughly five times the size of his largest crowd to date.

A Republican source said McCain settled on his choice of a running mate at a meeting of his advisers Wednesday.

Thursday night's arrival of a private jet from Alaska at the Middleton, Ohio, airport raised speculation that Alaska Gov. Sarah Palin would be McCain's pick. Middleton is 25 miles from Dayton.

Rich Bevis, an airport manager at the Middleton airport, said that a woman, two men and two teenagers were onboard.

"This is the most secretive flight we've ever had," Bevis said.

See who the presidential candidates really are in two back-to-back documentaries.
Saturday and Sunday, beginning at 7 p.m. ET

In June, Palin told CNN that she thought McCain should choose a governor as his running mate and that she would like to serve on a national level, "but I don't think it's going to happen on this go-round though."

Watch Palin say she won't be VP this time »

In an interview with a Pennsylvania radio station that was taped Wednesday and aired Thursday, McCain said he had not settled on a nominee. The Associated Press reported that the interview with KDKA radio had occurred Thursday, which created confusion as to whether McCain had finalized his choice for vice president.

Watch who is on McCain's shortlist »

Asked whether either former Pennsylvania Gov. Tom Ridge or former Massachusetts Gov. Mitt Romney was his VP pick, McCain replied to KDKA, "I haven't decided yet, so I can't tell you."

Both men are expected to join McCain at a rally Saturday in Pennsylvania.

Ridge, who is also the former secretary of homeland security, is reportedly on McCain's shortlist of possible running mates.

A Republican insider said this month that McCain campaign manager Rick Davis has called several state party chairmen and indicated that Ridge will be the Republican vice presidential pick this cycle.

During his interview with KDKA, McCain praised Ridge, saying, "He's a great American and a great and dear friend, and I rely on him, and I have for many years."

But the possibility that Ridge could be McCain's running mate sparked a backlash among conservatives because he supports abortion rights.

Another potential VP pick, Sen. Joseph Lieberman of Connecticut, also raised concerns among conservatives. Lieberman, an independent senator who was the 2000 Democratic vice presidential nominee, has been a vocal supporter of the war in Iraq, but he, too, backs abortion rights.

If McCain picks either man, it could drive away social conservatives who are already uneasy about his nomination, conservative activists warned.

In an open letter to McCain, conservative activist Richard A. Viguerie wrote, "Your indication that you're willing to put a person who has a clear, unequivocal pro-abortion record within a heartbeat of the presidency is alarming."

"Sen. McCain, you are exceedingly proud of being a political maverick -- you wear it as a badge of honor. Well, poke the base of the Republican Party -- the conservatives -- in the eye one more time by choosing a pro-abortion vice presidential candidate, and conservatives will show you that two can play the maverick game," Viguerie said.

Romney ran against McCain this year for the GOP presidential nomination and was a frequent critic of the senator on the campaign trail.

But Romney endorsed McCain after he captured the Republican nomination and has campaigned for him. He also opposes abortion rights, a position he said he came to in 2004 after studying the stem cell-issue as Massachusetts governor. Before then, Romney was in favor of abortion rights.