The columns...it's all a bit much, say conservatives 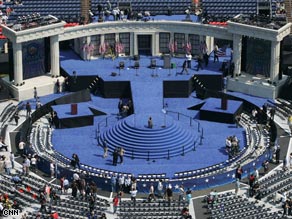 The stage at Invesco Field has been called Barackopolis and the Temple of Obama.

The descriptions of the transformation of Denver's Invesco Field peppered the Republican blogosphere hours before Barack Obama was set to address a dancing, jubilant crowd of more than 70,000 supporters on the Democratic National Convention's final night.

The conservative online magazine The American Thinker remarked that the stage made use of the "basic stagecraft of visual illusion."

Watch the buzz over Barackopolis »

"He has 300 foreign policy advisers -- and for his convention speech, a football stadium equipped with a movie set that looks like a Greek temple," nationally syndicated radio host Rush Limbaugh wrote on his blog Thursday. "He claims to be the one that 'we have been waiting for,' and he can lower the seas and promise and deliver universal love simply by showing up."

Obama's campaign manager came back swinging, saying that the GOP has it all wrong. The senator wanted as many people as possible to be involved in this night because the election is about them. CNN's Candy Crowley wrote that Obama wanted the night to have an Everyman feel. "Obama-ites are all over the place, passing out volunteer cards."

Conservative commentator William Bennett said CNN was in danger of becoming MTV, joking that next week's Republican National Convention in Minnesota will be CMT, or Country Music Television, as country acts will play. "No Dixie Chicks though," he said with a laugh.

The online version of the conservative magazine National Review ran an editorial called, "Obama's Thugs," which purports to delve into Obama's fundraisers, and another editorial that repudiates any comparison to the Rev. Martin Luther King Jr. -- comparisons that were made throughout the week because Thursday marks the 45th anniversary of King's "I have a dream" speech on the Washington Mall.

The GOP's official Web site offered no criticism of the stadium except to link to a New York Post cover, "O' MY GOD! Dems erect Obama temple."