Obama: John McCain doesn't get it

DENVER, Colorado (CNN) -- Sen. Barack Obama laid out his plan for change in America as he accepted the Democratic presidential nomination Thursday night, securing his place in history as the first African-American to lead a major party ticket. 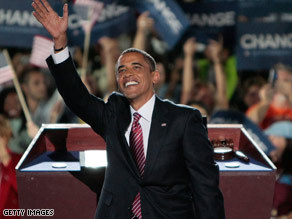 "Change happens because the American people demand it -- because they rise up and insist on new ideas and new leadership, a new politics for a new time. America, this is one of those moments," he told supporters at the Democratic National Convention. "I believe that as hard as it will be, the change we need is coming."

Obama pitted himself against John McCain, repeatedly countering attacks from his Republican rival while casting the election as a choice between change and failure, as he addressed tens of thousands of cheering people and millions of primetime TV viewers.

McCain would continue the policies of the Bush administration, Obama said.

"We are here because we love this country too much to let the next four years look just like the last eight. On November 4, we must stand up and say: 'Eight is enough,' " he told the Denver throng.

In addition to slamming McCain on Iraq, energy policy and health care, Obama said his rival for the White House is out of touch with the concerns of the average American. Watch Obama's entire speech:

"He said that our economy has made 'great progress' under this president. He said that the fundamentals of the economy are strong. And when one of his chief advisers -- the man who wrote his economic plan -- was talking about the anxiety Americans are feeling, he said that we were just suffering from a 'mental recession,' and that we've become, and I quote, 'a nation of whiners,' " Obama said, eliciting boos from the crowd.

The speech marked the culmination of the four-day convention in Denver, during which party leaders pushed to heal the rift from a bitter and prolonged primary battle between Obama and Sen. Hillary Clinton. By Thursday, Obama had received clear endorsements from Clinton and her husband former President Bill Clinton.

Watch highlights from the convention »

By early evening, the line of people seeking to get into Invesco Field to hear Obama's address stretched for six miles, and the crowd that filled the stadium was more than 80,000 strong.

"I stand before you tonight because all across America something is stirring," Obama told the audience. "What the naysayers don't understand is that this election has never been about me. It's about you."

In a statement issued immediately after the speech, the McCain campaign called the speech "misleading" and said it was "fundamentally at odds with the meager record of Barack Obama."

"When the temple comes down, the fireworks end, and the words are over, the facts remain: Sen. Obama still has no record of bipartisanship, still opposes offshore drilling, still voted to raise taxes on those making just $42,000 per year, and still voted against funds for American troops in harm's way. The fact remains: Barack Obama is still not ready to be president," said a statement from the campaign. The "temple" is a reference to the columns that formed the backdrop for Obama's speech. Grade Obama's speech

Obama also outlined his promises for the nation -- vowing to cut taxes, end the country's dependence on oil from the Middle East and offer affordable healthcare for all Americans. He also pledged to end the war in Iraq responsibly, and "finish the fight against al Qaeda and the Taliban in Afghanistan." iReport.com: Watch and share your thoughts on Obama's speech

He wrapped up his speech by telling the crowd, "America, we cannot turn back. We cannot walk alone. At this moment, in this election, we must pledge once more to march into the future."

Watch as fireworks mark the end of the convention »

The crowd gave Obama a roaring welcome and met lines of his speech with chants of his catchphrase, "Yes, we can." Many political pundits said Obama hit it out of the park with his nearly 50-minute speech, and those in attendance agreed.

See what CNN analysts have to say about Obama's speech »

"It was an excellent home run," said Matt Besser, an Obama representative to the DNC platform committee. "He did everything he needed to do. He gracefully dissected John McCain and then set out his own vision, and clearly everyone got it."

In the hours leading up to the speech, a star-studded line up of musicians performed, including Stevie Wonder, John Legend, Sheryl Crow and Will.i.am.

Watch musicians perform at the convention »

The scene was much like a rock concert, with the foot-stomping, flag-waving crowd dancing and bouncing beach balls as they awaited Obama's arrival.

When Obama officially locked in his party's nomination on Wednesday, delegates sobbed, cheered and hugged in celebration of the historic moment.

The Democratic candidate's address fell on the 45th anniversary of the Rev. Martin Luther King Jr.'s "I have a dream" speech.

McCain also honored Obama's achievement in a television ad that aired during the convention.

Earlier in the evening, former presidential candidate Al Gore turned the focus to the environment, an issue that received little attention earlier in the week. He also invoked the bitterly disputed 2000 presidential election to argue that Americans should elect Obama in November. Read about Gore's address

"Eight years ago, some said there was not much difference between the nominees of the two major parties and it didn't really matter who became president," he told delegates. "But here we all are in 2008, and I doubt anyone would argue now that election didn't matter," he said.

Next week, it's the Republicans turn. Their four-day convention gets underway Monday in Minneapolis-St. Paul, Minnesota.