PHOENIX, Arizona (CNN) -- Vice President Dick Cheney defended the Bush administration's record on prisoner interrogations, telling a veterans' group that its use of "alternative" techniques against suspects was legal and proper. 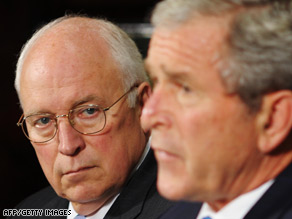 Vice President Dick Cheney, in June with President Bush, says torture at Abu Ghraib was "the misdeeds of a few."

"No nation in the world takes human rights more seriously than the United States," Cheney said at the American Legion's annual convention.

"The policies of our country comply with our law, which prohibits torture. We're proud of our country and what it stands for. We expect all who serve America to conduct themselves with honor, and we enforce the rules."

President Bush acknowledged in 2006 that top operatives of the al Qaeda terrorist movement had been held in CIA custody and subjected to what he called "alternative" interrogation techniques.

One was Khalid Sheikh Mohammed, the admitted mastermind of the September 11, 2001, attacks on New York and Washington that killed nearly 3,000 people.

Although Americans were "rightly outraged" by the 2004 revelations of Iraqis being abused and tortured by U.S. troops at Iraq's Abu Ghraib prison, he said, people who broke the law in that case were punished.

"The misdeeds of a few should never be used to slander the good and decent Americans who go to work every day to keep our country safe," Cheney said.

The White House has consistently denied that the United States practices torture, but CIA officials have admitted to using at least one technique -- "waterboarding" -- that has been considered a war crime in the past.

Top Bush administration officials, including Cheney lawyer David Addington, were involved in drafting the legal justification for those techniques, a former aide to Secretary of State Colin Powell told a congressional committee in June.

Critics, including the American Civil Liberties Union, decry waterboarding as torture and have demanded a stop to it.

Some in Congress also have criticized waterboarding as a violation of the Geneva Conventions that could imperil U.S. soldiers should they ever be captured.