(CNN) -- The question is starting to feel a little old: Whom will Barack Obama pick as his vice president? 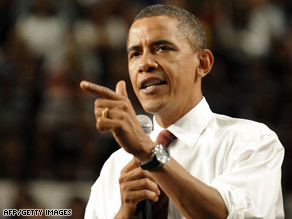 Sen. Barack Obama has a big event scheduled Saturday. Will his No. 2 man (or woman) be by his side?

With the clock ticking (the Democratic VP candidate delivers a big speech next Wednesday) the announcement is at most days and at least a few hours away.

Everyday seems to be "the day," the day the guessing game will finally end.

In a poke at all of the VP buzz, the Obama campaign sent an e-mail to reporters Wednesday with the subject line "Vice presidential ..."

The first line of the e-mail: "Just kidding."

The e-mail contained details about Obama's schedule with no mention of any of the potential vice presidential candidates.

But if the top contenders have any inside information, they're doing a good job of keeping quiet.

Sen. Joe Biden told reporters camped outside his Delaware home Tuesday that it's not him.

Asked where he would be Saturday -- when Obama is reportedly scheduled to hold a campaign event in Springfield, Illinois, that may feature his new running mate -- Biden replied, "here," pointing to his driveway.

He softened up a little later that night, telling reporters, "I promise you, I don't know anything."

Along with Biden, Sen. Evan Bayh of Indiana and Virginia Gov. Tim Kaine are considered to be among the top tier of VP contenders.

Bayh has managed to stay out of the spotlight this week. Does that mean he's dodging the question?

He hit the Sunday talk show circuit this weekend and tried out the attack dog role, criticizing Republican John McCain for his stance on Georgia, Iraq and national security.

When asked about the veepstakes, the former governor said he had "nothing to report today."

Kaine, on the other hand, seems to have no qualms about taking the main stage this week.

A relative newcomer to national politics, Kaine is scheduled to appear alongside Obama on Thursday as the presumptive Democratic nominee campaigns in central Virginia. Could he be introduced as Obama's No. 2 man?

The pair will host an invitation-only town hall meeting Thursday in Chesterfield County, a suburb of Richmond. Kaine's sturdy performance in the traditionally conservative Richmond suburbs helped vault him to the governorship in 2005.

Obama has stops scheduled in Virginia on Wednesday and Thursday before returning home to Illinois for the Springfield event, which takes place where he first kicked off his presidential run.

The event marks the beginning of a tour of battleground states leading into next week's convention in Denver, Colorado.

The Obama campaign has kept the details on both the timing and selection of the running mate under wraps. They would neither confirm or deny whether Obama would appear with his VP candidate this weekend. iReport.com: Whom do you think Obama should pick?

Although the focus in recent days has been on Bayh, Biden and Kaine, there are quite a few other serious contenders, and a curveball pick could always be in the works.

Obama's campaign says that when he makes up his mind, he'll send a text message and e-mail to his supporters to let them know who his sidekick will be.