WASHINGTON (CNN) -- Sen. John McCain said Wednesday that the crisis in Georgia should not be used to score political points, but his campaign has stepped up its attacks on Sen. Barack Obama's foreign policy credentials. 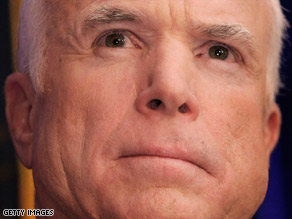 Sen. John McCain says Russia's entry into the WTO should be reviewed.

In response, Obama's top foreign policy aide suggested that the presumptive Republican presidential nominee was willing to "shoot from the hip" and was acting irresponsibly by offering strong support for the Georgia government.

On Wednesday, McCain continued his tough line against Russia, saying its potential membership in the World Trade Organization should be reviewed as a result of its actions in Georgia, as well its relationship with the G-8 nations, which represent the world's largest industrial economies.

McCain also said that an international peacekeeping mission should be sent to Georgia and that NATO should re-consider adding Georgia and Ukraine, another former Soviet republic, to the alliance.

"After the events of the past six days, no one should wonder why countries on Russia's periphery so ardently seek the security guarantees alliance membership represents," McCain said during a campaign stop in Birmingham, Michigan.

Russia has strenuously objected to both nations joining NATO.

After President Bush said Wednesday that he was ordering the U.S. military to help Georgia's citizens, Obama applauded the move.

"The situation is still unstable, and Russia must back up its commitment to stop its violence and violation of Georgia's sovereignty with actions, not just words," Obama said in a statement. "The United States should now join our European partners in direct, high-level diplomacy with both Georgia and Russia to seek immediate implementation of a cease-fire, and to achieve a lasting resolution to this crisis."

The crisis in Georgia started Friday, when Russia moved troops in into South Ossetia after the Georgian government moved troops into breakaway territory. South Ossetia has been largely autonomous since 1991, but separatists would like to break with Georgia and either declare independence or join North Ossetia, which is part of Russia.

Secretary of State Condoleezza Rice, who is heading to France and the Georgian capitol of Tbilisi, said Wednesday that she has been briefing both candidates on the conflict.

When the crisis began last week, McCain, the presumptive Republican presidential nominee, was out front in condemning the Russia actions and calling for a cease-fire. "Today, we are all Georgians," McCain said Tuesday.

Watch McCain declare 'we are all Georgians' »

When the crisis broke out last week, the Obama camp called "for all sides to show restraint and to stop this armed conflict," echoing the statements from the White House and the European Union.

As Russia planes bombed Georgian cities and Russian troops advanced into Georgia, Obama, who is on vacation in Hawaii, condemned Russia's actions and called for a cease-fire.

McCain said Wednesday that the crisis was not the time for partisan attacks.

"I know the people of Georgia have enjoyed an unprecedented period of prosperity and freedom. And I know that at this time they're suffering mightily," the Arizona Republican said. "So maybe later on in the campaign, let's have a back-and-forth about who has comments or statements. Now, let's devote all our energy to helping resolve a situation which is fraught with human tragedy."

But, despite McCain comments, the crisis in Georgia has dominated the political debate between the two candidates' campaigns in recent days.

On Tuesday, Randy Scheunemann, McCain's top foreign policy adviser, attacked the presumptive Democratic presidential nominee's response to the situation in Georgia, saying his experience with the region amounted to a handful of paper statements.

On the other hand, McCain's experience with Georgia runs deep, Scheunemann said, noting that McCain and the Georgian president were friends.

"There's a depth of knowledge, a breadth of knowledge and an extent of historical experience that doesn't compare between the two on Russia policy," Scheunemann said. "You can't compare a 15-year historical record to three or four statements over the course of 15 months."

But Susan Rice, Obama's senior foreign policy adviser, said Tuesday that McCain's comments condemning Russia "may or may not have complicated the situation."

"We cannot shoot from the hip," Rice told MSNBC on Tuesday. "We cannot act on the basis of ideology or preconceived notions. When this crisis began, Barack Obama, the administration ... and all of our NATO allies took a measured and reasoned approach because we were dealing with the facts as we knew them."

McCain spokesman Tucker Bounds said Wednesday that his campaign was disappointed that Rice had launched "inflammatory and baseless" political attacks "during an international crisis when bipartisanship is needed most."

In response, Hari Sevugan, a spokesman for the Obama, said it was "the absolute height of hypocrisy" for the McCain campaign to "play the victim" after attacking Obama's "strong and appropriate" position on Georgia.

Bill Schneider, a CNN senior political analyst, said McCain could use the situation in Georgia to highlight one his inherent advantages over Obama: his experience.

But McCain's strong position in defiance of Russia also has risks, Schneider said.

"Some voters may worry: Does he want to start a new Cold War? The risk for McCain is that he could overplay the issue and frighten war-weary voters whose priorities right now lie closer to home," Schneider said.

All About John McCain • Barack Obama • Republic of Georgia • Russia