WASHINGTON (CNN) -- Prosecutors hoping to convict Republican Sen. Ted Stevens on corruption charges are fighting his bid to move the trial to his home state of Alaska. 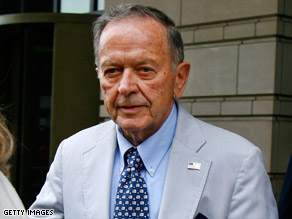 In requesting a change of venue, defense lawyers last week said the allegations and most of the witnesses are based in Alaska, not Washington, where jury selection is scheduled to begin September 22.

Stevens, 84, was indicted July 29 on seven counts of filing false reports on his mandatory Senate financial disclosure forms. He has pleaded not guilty.

Late Monday, prosecutors filed their opposition to a change of venue with U.S. District Judge Emmet Sullivan, saying the trial should remain in Washington because "this is a case about a scheme to conceal, largely through the submission of false financial disclosure forms to the United States Senate."

The judge has indicated he thinks Washington is appropriate for the trial.

The indictment says Veco Energy paid for hundreds of thousands of dollars worth of work on Stevens' Alaska home during a period of about seven years, and that Stevens failed to report it. It also claims Veco asked Stevens to intervene on its behalf in Washington and that he sometimes did so.

The seven-term senator is not accused of accepting bribes.

Stevens has a second home in the nation's capital, a townhouse located in a gated, well-to-do neighborhood near American University.

In the time since his indictment, Stevens continued to attend Senate hearings and take part in legislative votes. But the federal indictment has clouded the Republican's re-election campaign.

His lawyers asked for a swift trial, hoping Stevens might clear his name before voters decide. Prosecutors have seized on that approach as they fight to keep the trial in Washington.

Stevens "first demanded a trial prior to the November election," prosecutors wrote, and now uses that schedule "in support of his request for a discretionary venue transfer." The government said further accommodation is not warranted.

Defense attorney Brendan Sullivan, who rose to prominence defending Oliver North during the Iran-Contra scandal of the 1980s, said during the Stevens arraignment it was the first time he had sought a speedy trial.

Stevens appeared in court for his arraignment July 31 and has been fingerprinted and photographed by the U.S. Marshals Service.

All About Ted Stevens • Alaska • U.S. District Court for the District of Columbia